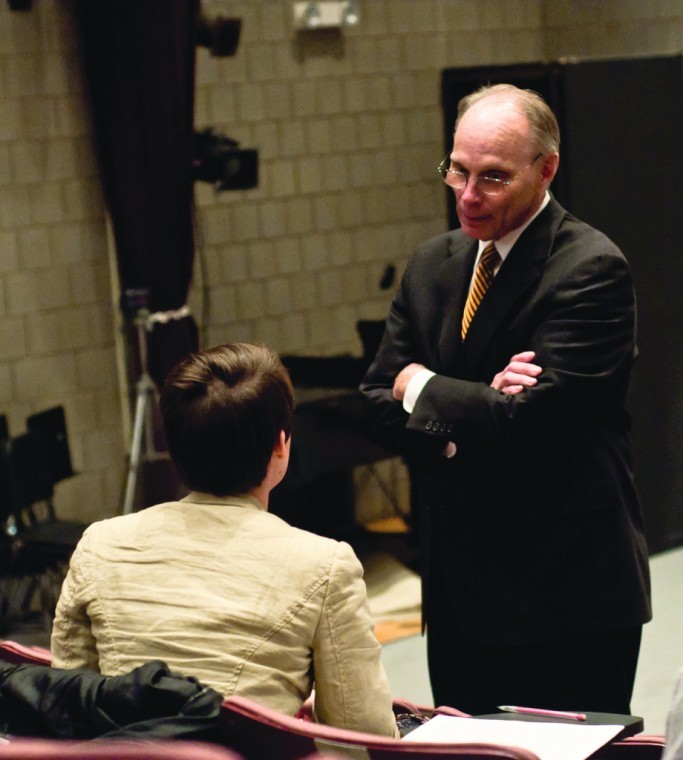 President John Byrd and Steve Griffith, vice president and academic dean, met with music department students on Monday, Feb. 6 in Lekberg Hall to discuss growing student concerns about faculty and other changes in the department.

A panel of upperclassmen sat near the front of the auditorium and asked questions on behalf of the student body.

“There’s a large amount of concern in the music department, and we as students would like to express that concern to faculty and administration in a way that we don’t think has been represented thus far,” senior and panel member Shannon Stevenson said.

During the meeting, students expressed serious concerns about the lack of a department chair and the possibility of having a part-time vocal position instead of a full-time position at the beginning of next year.

“Our goal all along is to have the chair replaced by the end of the year, and when I say end of the year I have to say the end of the academic year,” Byrd said. “Next year it looks like (the vocal position) will be vacant at full-time level but it will be filled with part-time adjunct. As we move forward, assuming that we can bounce right back, right now everything is looking very good.”

Byrd shared statistics showing that the music faculty numbers have been up overall, and saying that since 2003 three new faculty members have arrived on campus.

“Your department is the largest faculty member department,” Byrd said. “In fact, it’s almost 50 percent larger than the next department.”

“The move away from full time wasn’t to be permanent, wasn’t to be forever,” Griffith said. “We ran into the economic issue as you know, and had to make some cuts to adjust a full one year. We’ll try to find the very best part time folks that we can get to serve the students in that position.”

“Changing voice teachers in the college experience can really have the ability to stunt the growth of a student,” said the student panel. “By using part time faculty to fulfill these positions you are not attaining academic excellence and in this case it’s hurting students, who are paying the same tuition and studying at the same school. They’re not only be compromised as singers, they’re not finding the same opportunities in opera performances because they’re not at the same level as their peers.”

Other concerns shared at the meeting were what the students saw as possible roadblocks to finding a qualified voice instructor willing to work part-time, questions about non-tenured faculty voting rights in the department and the decision to perform the next opera in Lekberg Hall instead of the renovated Blank Performing Arts Center.

“Some of our larger issues weren’t brought up at this meeting,” Stevenson said. “But concerns for our department head, and the fact that we don’t have one currently, and the issues of what has been quoted as transparency inferring that we have been fully informed as to all the issues that are currently going on.”

Senior Allison Meyer said that the music department students were hoping to schedule another meeting with the president and the dean.

“It will be more of an open forum for students to discuss their personal issues,” Meyer said.

The music department student body meets once a week on Tuesdays for convocation, which Stevenson credits as the reason students can bring issues to light.

“I would encourage any other department to do what we’ve done and ask questions that concern them,” Stevenson said.