Men’s tennis looking to build on success in fall season 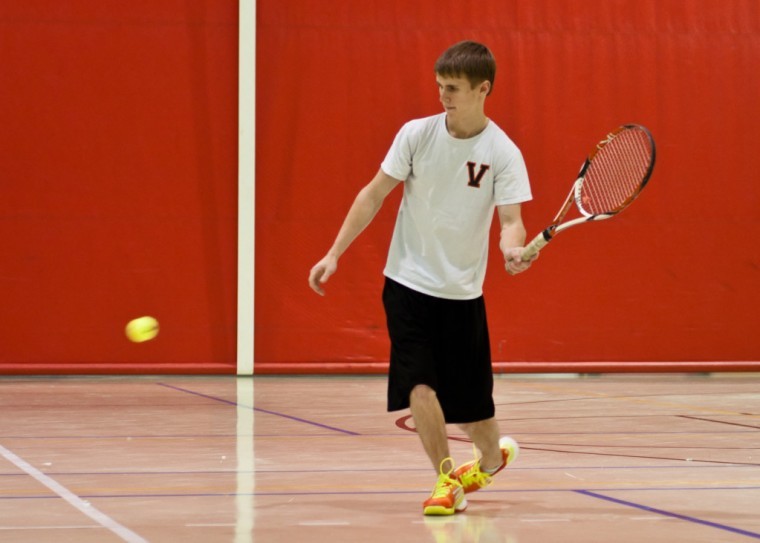 by Keith McCarthy and Billy Weathers

“Becoming a DIII tennis coach has always been something I’ve wanted to do,” Cox said. “So far things have been pretty smooth. The athletic department has been a great help and it has been great to get to know the players and find out what motivates each one of them.”

Cox brings both a winning attitude and experience within the Iowa Conference after playing for Central College in the early 2000s.

He was a part of the 2000 conference championship team and captained the Dutch during their first NCAA playoff berth in 2001.

Aside from being a coach at Simpson, Cox also works as a Tennis Pro at the Des Moines Country Club and a guidance counselor at Nodaway Valley High in Greenfield.

“Coach Cox is an awesome guy and coach despite the fact that he played at that school in Pella,” sophomore Alex Hook said. “He has a lot of experience on the court and is giving us great feedback on how to improve our game.”

Simpson had a disappointing showing in conference play last season; finishing 1-7, they were second to last in rank. Their overall record for 2010-11 was 4-19.

However, hopes are high after finishing .500 in fall play. The players are looking to keep building and still have success within the conference on their minds.

“As a team we are looking to improve on our conference standing from last year and to work hard every day in practice,” Cox said. “We are really starting to come together as a team and are looking forward to kicking off the season at Wisc., Eau Claire.”

The Storm will be led by seniors Daniel Schneider and Adam Summit. Cox is putting faith in his only upperclassmen and is hoping they can help keep the team on track.

Schneider, Summit and Hook are the only returners from last year’s team, so finding the right combinations on the court will be the key to a successful season.

“Adam had a really strong fall season, finishing second and third respectively in the conference B flight singles and double tournaments,” Cox said. “I am looking for some strong leadership out of the two of them this spring.”

While Summit may be the primary noise maker this season for the Storm, sophomores Dylan Hogan and Nathan Liston will contribute to the team’s success as well.

Hogan placed second and Liston fourth in the flight C singles division of the IIAC tournament in the fall.

Numbers may be a problem for the Storm, as they currently have six members on the team, but the players are looking at the positives

“Once we figure out who works best with who we’ll do fine,” Schneider said. “I think we have one of the most solid teams we’ve had since I’ve been here. Our underclassmen are pretty good.”

The Storm will play next at Concordia on Feb. 17.