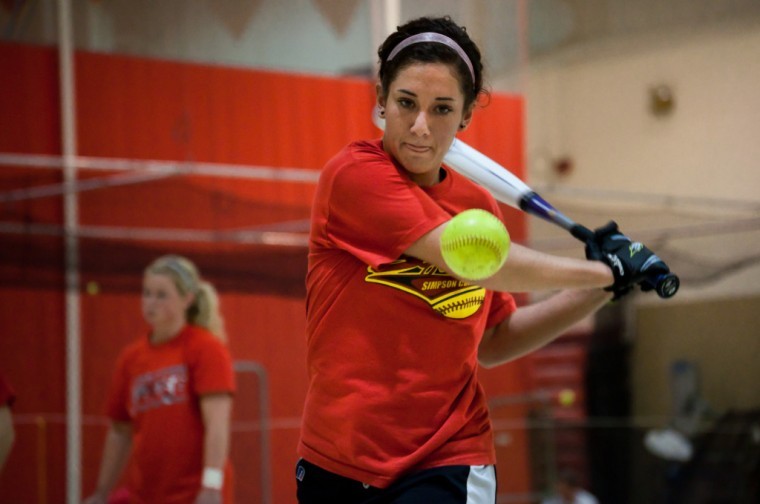 Postseason play is the goal this season for the Simpson College softball team with a mix of some young talent and rock solid play by the upperclassmen.

Senior Keri Sorensen talked about how the team has to take care of business and look to improve all season.

“This year we are trying to focus more on team goals and working to improve our game each time we step on the field,” Sorensen said. “Obviously we want to do well in conference, but we have to focus on what comes first and finding what works best for this team.”

The Storm starts off the season with trips to Marquette, Mich. Feb. 25-26 and Kissimmee, Fla. March 2-9 for non-conference play.

Even though the Storm is not playing conference rivals, these beginning games could have a huge impact on the course of the season.

Head coach Henry Christowski talked about how the games in the wooden, five-acre, Superior Dome in Michigan are important to the team’s future.

“We’re guaranteed to play six games, and they are all regional games, which are significant in Division III because of postseason play and the selection and seeding process come tournament time,” Christowski said.

The beginning of the season does not get any easier for the Storm when they travel to Florida.

Simpson begins the tournament facing Minnesota State Mankato, who finished last season ranked fifth in Division II. The Storm’s next opponent in the tournament is a member of Division I softball, the South Dakota Coyotes. After these two tough opponents, the team plays Division III foes for the rest of the tourney.

Christowski believes the team will know where it ranks following these first two tournaments.

“When we return from Florida we will know right where we are as a team,” Christowski said.

Christowski is not the only one who knows these games are vital to the team’s success. The whole team realizes how much it can benefit from a strong performance during non-conference play.

“We play a lot of games at both so we will be getting a lot of experience, reps and team bonding in before coming back to take on our conference,” senior Veronica Roshek said.

Sorenson said the games will give the team a chance to try new things before facing the conference at home.

“These tournaments are great because they give us a chance to try different combinations and see what works,” Sorenson said.

High expectations for the team stem from a number of talented players who are looking to build off of performances from last season.

Three of the top four hitters return for the Storm this season. Tieryn Potratz led the team in home runs, runs batted in and was second on the team in batting average. Potratz was named to the National Fastpitch Coaches Assocation All-Midwest Region team last year and her teammates anticipate another outstanding year for her.

“She is one of our strongest hitters and produces in clutch situations,” Arey said.

Roshek, Sorenson and Carissa Coopman are the seniors on the team this year, and are also expected to produce the same way they did last year.

Last year, Roshek led the team in batting average, hitting .421 while Sorenson and Coopman both knocked in over 20 runs and batted over .300.

“We have three seniors on our squad, and you always expect a lot from your three seniors,” Christowski said. “Keri, Carissa and Veronica were big contributors last year as juniors so we’re expecting them to bring their game up to another level.”

Sophomore Hillary Harmon was also a big producer for the team during the 2011 season, earning All-Conference honorable mention honors. She finished second on the team in home runs with six, and was fourth in runs batted in.

Harmon not only gets it done at the plate, but is also a talent in the field as well.

“We have Hillary Harmon at third base, who is probably the best defensive player in the country, in my opinion, who you just can’t hit the ball by,” Christowski said.

While there is great individual talent on this team, they know they can’t reach their goals without each other.

“Our team is really good at not focusing on the individual and it has really shown in our practices so far this year,” Roshek said. “Everyone is working hard and playing strong at this point, we will definitely continue working to keep this up.”