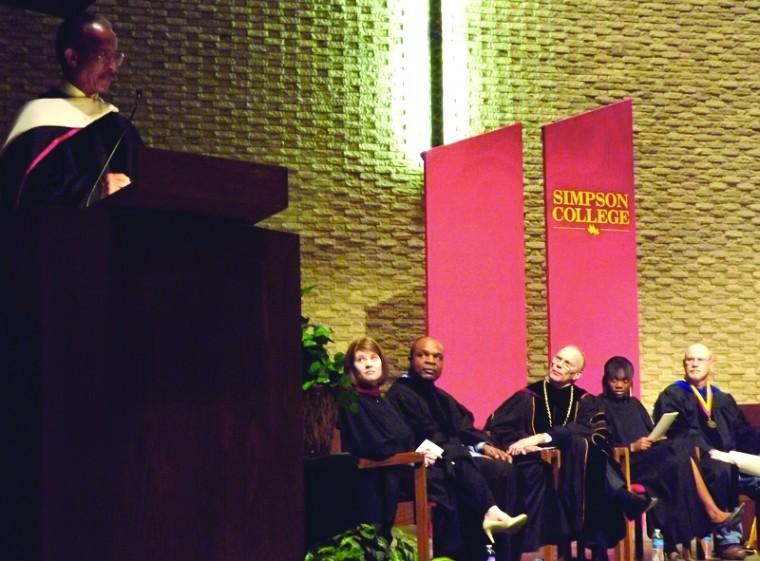 Minutes after receiving the Carver Medal, one of most prestigious honors that Simpson College bestows, Lt. Gen. Russell C. Davis had a surprise for the college.

He presented Simpson President John Byrd with a plaque Thursday night that contains a sculptured likeness of George Washington Carver, a piece of artwork the 73-year-old Davis had bought in his teens in his hometown of Tuskegee, Ala.

“Put it wherever you think it will do the most good, as a reflection of Dr. Carver and as a little piece of Russ Davis that will always be at Simpson,” Davis said.

Afterward, Byrd said, “It was totally unexpected. I was stunned, and I was very touched that he was giving us a piece, not just of his own history but, after listening tonight, a piece of family history as well.”

For Davis, the former chief of the National Guard Bureau, George Washington Carver represents more than a name in the history books.

Davis said his great-great grandfather, a former slave, helped raise the money for what now is known as Tuskegee University, where Booker T. Washington served as the first president and where Carver made many of his scientific discoveries.

Davis’s grandfather then worked for Carver at Tuskegee, and the family often entertained Carver for dinner. When Davis was a child, attending a nursery school on the Tuskegee campus, Carver was the “tall man in a lab coat” who gave the children candy.

“He was a man who mentored not just a few people, but generations,” Davis said, who noted that he was greatly influenced by Carver’s legacy.

“That’s what was so symbolic about his life. It was not about him…He was about doing what he thought was the right thing.”

Davis described how Carver’s quest for knowledge eventually led him to Simpson College, where he became the college’s first African-American student.

“He wanted an education, and he went through tremendous agony and pain to get it,” Davis said.

Davis noted the parallels between his life and Carver’s, saying both owe their careers, in part, to the people of Iowa.

Davis joined the Iowa Air National Guard in 1965 and spent almost 14 years in the state. “The best thing that ever happened to me,” he told a luncheon in his honor Thursday at the Des Moines Embassy Club.

During a series of Carver-related events in Des Moines and Indianola, Davis was reunited with Iowans from his past, including neighbors, insurance executives and even a fellow National Guard pilot, Don Armington, who attended the medal ceremony.

“Each one of the different venues of my life have made a significant contribution to my life today,” he said.

Just as Carver was a trailblazer, Davis became the Air National Guard’s first African-American general in 1982.

He described how, as a young man, he had been denied entry into the Alabama National Guard because of his race, only to return in an F-16 jet some 20 years later and see a sign welcoming him back to his home state.

“Only in America, folks,” he said.

They joined President Byrd and presented the Carver Medal to Davis, who indicated he had something else to say.

He then walked over to his chair on the stage at Smith Chapel and pulled the plaque out of an envelope, explaining how he had owned this sculpture of Carver for more than 60 years but now wanted Simpson College to have it.

“It was a remarkable gesture,” Byrd said later, “and certainly a gift that we’re going to treasure at Simpson College.”