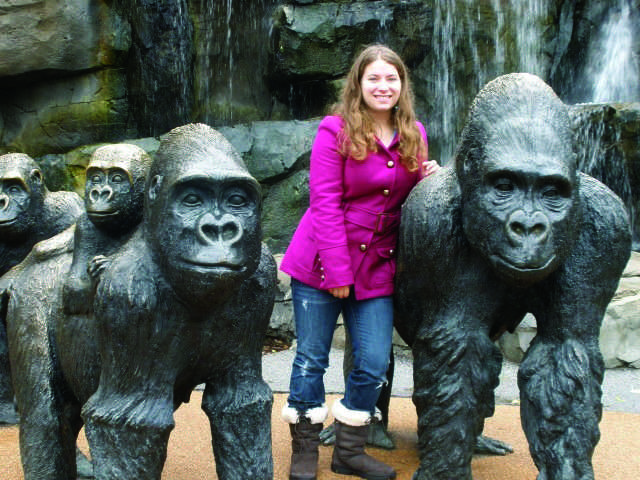 Draiss, a double major in psychology and primate studies with a biology minor, recently won the prestigious Psi Chi Research Award for her research on the symbolic gestures of bonobo great apes.

Draiss will receive her award and give a poster presentation on her research at the Midwestern Psychological Association convention in Chicago, held May 3-5.

To apply for the award, Draiss submitted an application that included an abstract of her research. Out of the 430 abstracts submitted, Draiss was one of 24 students who received recognition.

The project Draiss submitted was she conducted for her advanced research psychology class.

“In the first semester, students explore different areas of psychology that interest them and then narrow the scope of their topic in order to create a research proposal,” said Andrea Niebuhr, a senior who is in the class with Draiss.

Niebuhr said most students in the class complete their projects within two semesters, however she and Draiss are continuing their research for a third semester due to a need for more time.

According to Niebuhr, by the end of both semesters students have written a research paper, constructed a poster and presented both items to a select group of Simpson faculty. It is also recommended that the students submit their research proposals to the Midwestern Psychological Association Conference.

Draiss, a member of the Simpson Great Ape Studies program, decided to use the membership and her passion for primates as the basis for her project. The program provides students with scholarships and opportunities to research and learn through a partnership with Great Ape Trust of Iowa in Des Moines.

“As a Great Ape Trust scholar, I went and worked with the bonobos, sometimes served as caregiver, and also worked on research projects here at Simpson,” Draiss said.

Draiss chose the bonobos she worked with at the Great Ape Trust as the subjects for her advanced research project.

“My study focuses on the symbolic gesture use of Kanzi and Panbanisha, two language-competent bonobos,” Draiss said. “Both were raised in a language rich environment and are able to use over 400 abstract symbols, or lexigrams that stand for words in order to communicate with humans.”

While Draiss interned and worked at the Trust with the apes, she began to notice their gesture use was also very complex and added to their communicative abilities with humans. She wanted to see if gestures they used were symbolic like the language they had been taught.

“It’s generally believed that humans are the only species capable of using symbolic gestures, or gestures that take the place of words,” Draiss said. “However, I found that both Kanzi and Panbanisha use symbolic gestures while interacting with humans.”

An example of a symbolic gesture is pointing. It allows for communication between two individuals, and you may point at an object rather than saying its name.

Draiss formed two hypotheses before performing the research. First, that because bonobos already use linguistic symbols to communicate with humans, they will also use gestural symbols to enhance communication. Second, over time, as understanding of spoken word increases, use of symbolic gesture use by language-competent bonobos will also increase.

To test her hypotheses, Draiss analyzed hours of archived video of the bonobos. All gestures performed by the bonobos were noted, along with the type of gesture, circumstance surrounding the gesture, the results and whether or not it was symbolic.

Draiss analyzed two age groups: 2-5 and 11-14. Video archives were needed to document gestures from when the bonobos were at a younger age. Draiss is still in the process of coding video, but expects to be done in the next few weeks.

Don Evans, psychology professor and Great Ape Studies Director, assisted and advised Draiss during her research in getting the archived videos and setting up a behavioral project.

Draiss spent an entire summer in Camaroon working at an animal sanctuary that held primates. She plans on going back for eight months before going to graduate school for primatology.