Mosby hustles out on the court 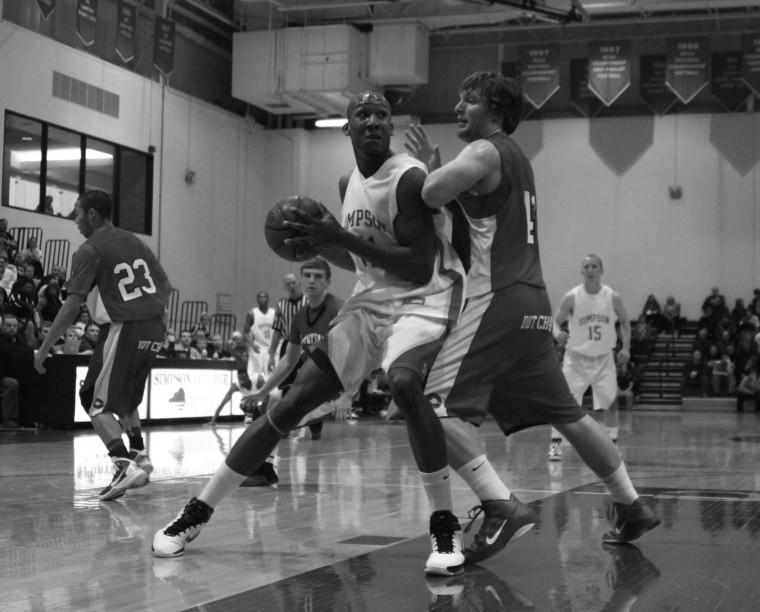 Not only does Mosby hold the rebound record in the Iowa Intercollegiate Athletic Conference (IIAC), he is also second on the list for most blocked shots and is the only player averaging a double-double every time he gets on the court.

A Chicago native, Mosby took up basketball only as a sophomore in high school. After breaking his arm playing football, he gave it up and picked up a basketball.

Mosby attended Ellsworth Junior College in Iowa Falls for two years after high school and then ventured over to University of Minnesota-Crookston to play ball. After only a semester, he wasn’t quite happy with the school he picked out.

Looking for a new place to call home, Mosby talked to his junior college coach who is good friends with and mentioned Simpson’s head coach, Charles Zanders.

Mosby missed Iowa and wanted to come back. He talked to Zanders, applied, and got accepted to Simpson.

Grand View University in Des Moines also had his application, but processed it a week after Simpson did.

“I want to thank the admissions department for jumping on it right away when I told them about Cornelius,” Zanders said. “And also thanks to Grand View for dragging their feet.”

Who wouldn’t be thankful? Mosby is the leading rebounder in the conference with an average of 10.3 per game, which is three more than the next five players behind Mosby.

Sixty-seven have been offensive rebounds, and 138 have been defensive, totaling 205. He is second in the conference for blocked shots, totaling 33 so far this season and averaging 1.65 per game.

And the season isn’t over yet.

“When you have 6’8,” 230 pounds of power and man, it’s a nice toy to be able to have on your basketball team,” Zanders said. “Other opponents have to prepare for his size, his speed, his quickness and his shot-blocking ability.”

Rebounding can’t come easy enough for Mosby. He tied the school record last year with 24 rebounds in one game against Central, and his high this year is 15.

“He’s a magnet for the ball,” Zanders said. “When things are flowing for him, you can’t stop him from getting rebounds.”

“Rebounding is something that you can be selfish with,” Mosby said. “I’ve taken pride in rebounding since I’ve started playing basketball my sophomore year in high school, because it’s all hustle and I just want to go get it.”

One can always find Mosby towering over his opponents to grab that ball off the rim.

So far, Mosby has enjoyed it here at Simpson and is happy he made the switch.

“It’s been a great experience of my college career so far and I really enjoy it,” Mosby said.

Playing for three different teams within four years isn’t fun and games. Every team has its own backgrounds and philosophies. Zanders teaches as much as he can with the time allowed to him.

“It’s a process of learning our system and things of that nature, and also the Iowa Conference,” Zanders said. “When you’re big and athletic like he is, there’s sometimes where the referees kind of think that he can take fouls that probably should have been called. It’s frustrating for him on that part, but at the end of the day I think he has really enjoyed his time here at Simpson. The Iowa Conference has been competitive and I think he has done well.”

Mosby now isn’t alone. An old friend and teammate, junior Olu Rotibi also from the University of Minnesota-Crookston, joined Mosby and the Simpson team for the 2011-2012 season.

“We played ball together at Crookston and later on down the line we got closer and became good friends,” Rotibi said.

Rotibi enjoyed playing with Mosby at Minnesota and hated to see him leave.

“It was fun, but once he left it kind of sucked,” Rotibi said. “It was fun when he was there; he was actually the excitement over there.”

With Rotibi also not happy at Crookston, Mosby was a big impact on his decision to transfer to Simpson.

“He had a huge impact on me transferring over to Simpson,” Rotibi said. “He was telling me how it was over there and being real with me and telling me that this would be a good fit for me and enjoy it over here.”

With Rotibi by his side, Mosby also likes his teammates, even when there may be some complications.

“We all come from different backgrounds,” Mosby said. “When you’re on the court and you’re competing, it’s tough sometimes, but we all know we’re brothers off the court. We sometimes disagree on the court but we know it’s all love when it comes down to it.”

Even with his short time here at Simpson, he has made a big impact on the Storm’s success.

“He’s a legitimate force in the Iowa Conference and he’s a big part of our program and the success that we’ve had at this point,” Zanders said.

Rotibi is proud to see his accomplishments throughout his basketball career.

“I’m proud of him; he deserves it,” Rotibi said. “He works hard; a lot of people didn’t see the work ethic he put over the summer and how he was when we were at Minnesota. He works hard and if you work as hard as he does, you deserve it.”

Zanders will hate to see him leave, but is thankful for the time he had with Mosby.

“I wish he had a couple more years left, but you can’t look back, you can always be thankful for what you were able to have and we try to find somebody to fill his shoes,” Zanders said. “That’s going to be really hard to do, but I was really fortunate and honored to be his coach. He will definitely be missed not only in our program, but just being a player and a good guy.”