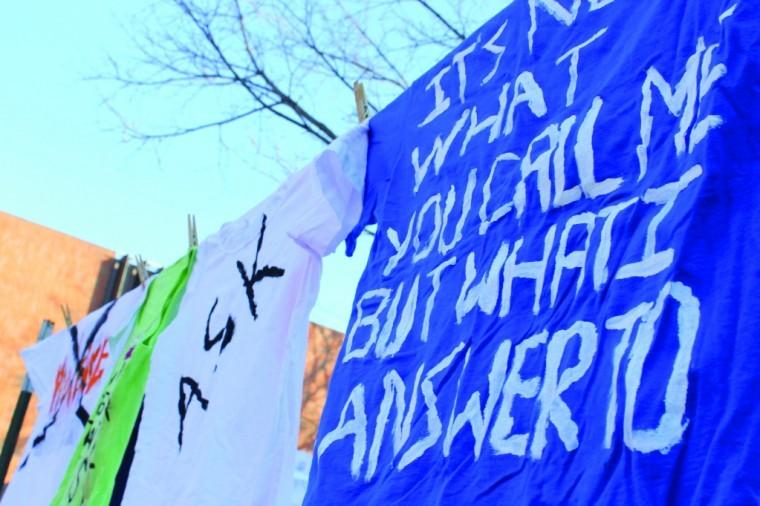 The Clothesline Project (CLP) decorated T-shirts on Feb. 6 and 8 to raise awareness of domestic violence.

The CLP originally started in Mass. to address the issue of violence against women. The project is a way for those who have been affected by violence to decorate a shirt and make the problem known to others around them.

“The Clothesline Project, in my opinion, is a way for everyone on campus to see how people feel about sexual assault or anything similar to that,” senior Alex Carlson said. “It is a way to bring awareness to people that it happens to people on campus whether they realize it or not. And that it’s everyone’s problem, not just women’s problem.”

Students were given the opportunity to take part in the CLP by decorating T-shirts to help support domestic violence.

“It’s anyone who wants to support it,” Carlson said. “We’ve had victims, we’ve had survivors and we’ve just had men from other fraternities. Anyone on campus who wants to make a shirt can.”

Participating in the event gives students a chance to recognize what is going on, senior Hannah Landgraf said, and to express how they feel about the issue.

“Violence against women, especially sexual violence happens everywhere,” Landgraf said. “It happens on Simpson’s campus. Instead of simply not talking about it, the CLP allows conversation to start and for students to take a stance against it.”

People who realize how often domestic abuse happens truly have a passion for this project and making it known to others that it needs to end, according to senior Kristina Kelehan.

“Both people who have been victims or are just in support of ending the violence are the ones who really kind of take this to heart,” Kelehan said. “There are different sayings on the T-shirts that range from something as simple as ‘saying no to violence’ or in-depth, a little bit longer sayings. People [will] read those and understand that it is a very big issue that occurs and that a lot more people are victims of it that it is commonly thought of. It is a very serious issue that needs to end.”

In Landgraf’s opinion, CLP’s goal is to gain support of domestic violence.

“I would say the main goal is advocacy,” Landgraf said. “Sometimes the shirts cause a sort of shock-and-awe effect, which I think is great. Violence against women isn’t some sort of second class issue, whether painting a shirt or simply seeing them across campus, the Clothesline Project hopes to bring violence against women to the forefront and to begin conversation about how to end it.”

After the project, Carlson would like to see the matter taken more seriously on campus.

“I want to see more awareness and more people involved with it, realizing that it does exist and it’s not something to just joke about because rape and sexual assault isn’t something that’s funny or that should be joked about,” Carlson said. “It’s a serious matter that impacts a lot more people than anyone realizes.”

Carlson hopes that students realize that joking about domestic violence is not OK.

“I would love to see the jokes stop,” Carlson said. “Like the comments of, ‘I got raped by the test’ or ‘homework is raping me,’ or you know stuff like that. It’d be great for those comments to stop because it’s just another way to joke about it and act like it doesn’t exist.”