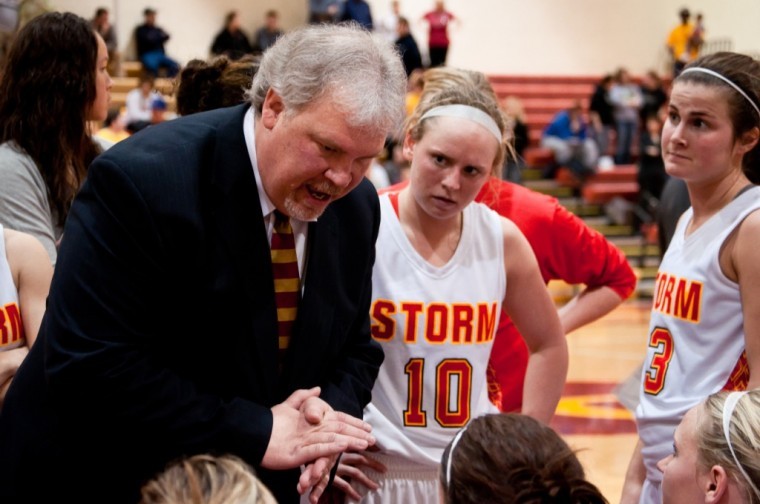 Niemuth started his coaching career as the boys head basketball coach at Dallas-Center Grimes. While there, he was offered a position as Simpson’s women’s head’s coach by his own high school coach.

Niemuth arrived at Simpson and was there in time to begin the 1987-1988 season.

Niemuth always envisioned himself going back to his hometown, Kansas City. Thinking of Simpson as a stepping-stone in his career, he soon fell in love with the school, state of Iowa and thought highly of the athletes he coached.

“I thought I would be here for three years,” Niemuth said. “I wanted to live in a city and I never thought I would survive in a small town. After I got here for a few years, Iowa kind of grew on me. I met my wife, started a family and fell in love with Iowa ever since.”

“I think I’ve been through four or five presidents (at Simpson), I’ve seen a lot of people come and go at this school, but I’ve enjoyed it,” Niemuth said.

Niemuth is the second coach in Simpson’s history to reach 300 wins and all time in wins behind former baseball coach and current Athletic Director John Sirianni.

Working under Sirianni for years, Niemuth was also part of Simpson baseball’s success.

“Brian was an integral part of the baseball program that I coached and was instrumental in helping us with our successes,” Sirianni said. “It has been my pleasure to have worked with this outstanding professional for the last 25 years.”

Niemuth has enjoyed working under Sirianni as well while coaching and working with Simpson athletics.

“If I’m mentioned in the same breath as Coach Sirianni as a coach, I feel pretty good about that,” Niemuth said. “I was his assistant for 10 years and I learned a lot from him.”

Little did Niemuth know that he would be walking in the same shoes as Sirianni. Niemuth reached his 300th Iowa Intercollegiate Athletic Conference (IIAC) win again this year and was unaware that he was so close to this goal.

This was also very special moment for Niemuth due to the fact that he beat a long-time friend, Jane Hildebrand, from Luther College.

“The thing I like most is the record I broke was held by a good friend of mine, so it meant a lot to me to beat her record because I really respect her,” Niemuth said.

According to Luther.edu, Jane Hildebrand held the old record with 293 conference wins before retiring after 27 years of coaching. Hildebrand then moved on to assistant dean of student life at Luther College.

Junior Nicole Crisp transferred here to Simpson this year to play under Niemuth. Crisp is happy to be part of the Storm’s success in her first year here at Simpson.

“I’m really honored to be a part of a great group of girls that helped accomplish another milestone in Coach Niemuth’s career,” Crisp said. “I’ve seen many plaques in his office with his 100th conference win, 200th conference win, and I’m just really glad I could be a part of the history he has here. Not a lot of coaches can accomplish what he has, and from what I see, he has no intentions of stopping anytime soon.”

Senior Stacey Schutjer has played under Niemuth for four years and has had a strong relationship with him throughout her career.

Niemuth will be remembered as one of the most winningest coaches in Simpson history.

“I have I really enjoyed the top-notch ladies that I get to work with,” Niemuth said. “I get really quality not just athletes but people in our program, so I’ve enjoyed that. I’ve enjoyed the people that I have worked with.”

Sirianni is thankful to have Niemuth be part of the Simpson family for so many years.

“I am extremely proud of coach Brian Niemuth,” Sirianni said. “He has set the standard for excellence in the Iowa Conference for women’s basketball. Furthermore, he has done it with class and dignity.”