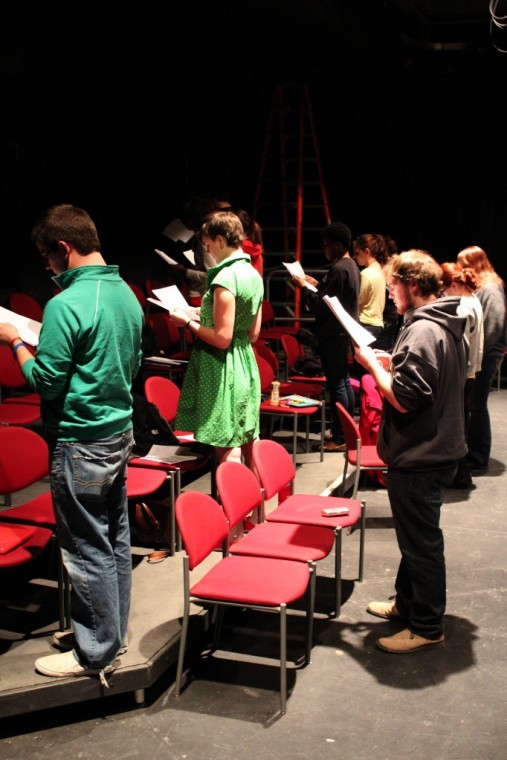 Simpson students are performing “A Memory, A Monologue, A Rant and A Prayer” for the “V-Day Campaign”; a national organization founded by Eve Enzler to promote the ending of violence against women.

During the week of Feb. 6 many different events including the “Clothesline Project” and “Penny Wars” are happening around campus to promote this campaign.

“Many organizations have been involved in this year’s campaign,” said Kennedy Horton, senior and director of “V-Day Campaign.”

Every year prior, Simpson students have performed “The Vagina Monologues,” but this year they have switched it up and are performing “A Memory, A Monologue, A Rant and A Prayer.”

“The most significant part of the switch, and what I love about the new performance, is that men are involved and that it takes a more global outlook by showcasing the diversity of women affected by violence in the world,” senior Hannah Landgraf said. “This cause isn’t just about women in the United States, but about women all over the world. The inclusion of male voices takes men from being purely offenders to being able to equally contribute to the movement.”

This play is a collection of personal experiences with a central meaning directed towards stopping the violence against women everywhere.

“This play is important because it illustrates both the hate of the world and the raise to a better one all in the same show,” Horton said. “This show has so many sad stories, but it also has stories that illustrate the strength in women and that there is hope that the violence will subside someday.”

There are 18 students in this production, and Horton says one of her main goals in directing this play is to not just educate the audience but to also educate the actors involved.

“It seemed natural to take something I was passionate about and put it into action,” Landgraf said. “The ‘V-Day Campaign’ allows me to make a difference in a small way and to honor survivors and victims of violence against women.”

The Centers for Disease Control and Prevention estimate that 20 to 25 percent of college women in the United States experience attempted or complete rape while in college. The campaign seeks to inform students that violence isn’t something that only happens at large universities or in big cities.

It can happen anywhere and to anyone.

“Do something different,” Landgraf said.”Take a step out of your comfort zone. Support a cause that affects people you know.”

All of the proceeds of these events will go to the Rape, Abuse and Incest National Network (RAINN), an organization that provides support for sexual assault victims.

The campaign and its events are completely student-run.

“I love directing,” Horton said. “It’s one of the most fulfilling jobs that I’ve ever had.”

A luncheon will take place on Thursday, Feb. 9 in Dirlam Lounge at 12:30 p.m., which includes a speaker and a skit directed by senior Heather Powers.

The play is Friday, Feb. 10 and Saturday, Feb. 11 where there will be a bake sale and a silent auction.