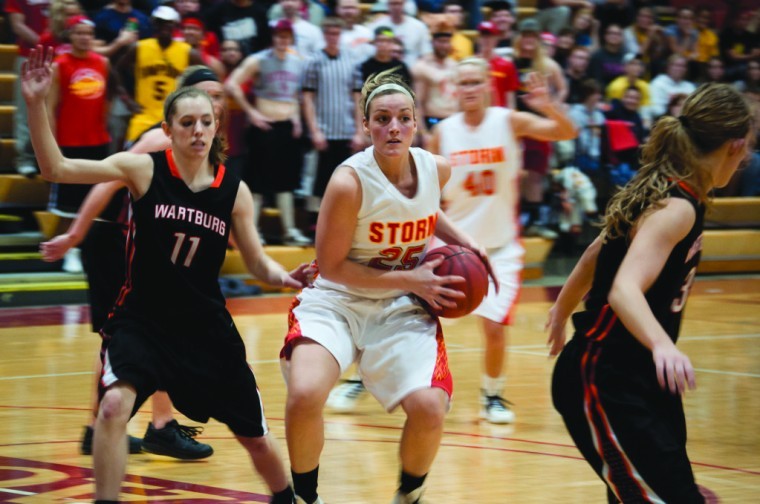 The Simpson College women’s basketball team fell 79-59 to Coe in the IIAC title game on Feb. 25 but received an at-large bid to play in the NCAA Tournament.

The team will travel to Chicago on March 2 to face UW-Eau Claire.

This trip to the NCAA Tournament makes eight consecutive trips for the Storm women. The team is 9-11 all-time in the tournament, with seven of those wins during head coach Brian Niemuth’s career.

A viewing party will be held in Indianola at The Brick House restaurant beginning at 5:30 p.m.

The Storm’s scoring options were limited in the game against Coe, and the team only managed a 28.4 shooting percentage on the night. The team’s big scorers, senior Stacey Schutjer and junior Kate Nielsen, were double or triple-teamed relentlessly by the Kohawks. Nielsen and Schutjer still managed 20 and 17 points respectively, but the team couldn’t come back from the lead Coe built up early.

Besides the loss to Coe, the Storm postseason has met with success.

After a come-from-behind 59-49 win against Loras College on Feb. 18 to claim the regular season championship, the Storm made a thrilling comeback against Wartburg College on Feb. 23 in the semifinals of the conference tournament.

In the regular season finale, the Storm outscored the Duhawks 40-25 in the second half and clinched the number one seed for the conference tournament.

“I was not happy with how we executed in the first half,” Niemuth said. “We didn’t run our offense very well, and we didn’t do a great job of rebounding. Second half we executed a lot better and definitely stepped it up defensively and I think that’s what turned the game around.”

The championship also gave the women home court advantage throughout the tournament.

Junior Chelsie Rohrs was the standout performer in the game against Loras, pacing the Storm with 16 points on four of seven shooting from behind the arc. Schutjer and Nielsen were also big contributors as Schutjer scored 11 points and pulled down eight rebounds. Nielsen scored nine points with 10 boards.

Senior Ashley Rogers finished with nine points, four steals, five assists and the spark that led to a 13-3 run for the Storm to end the game.

The win was another milestone for the Storm who pushed their streak of 20-win seasons to eight with the win over Loras.

“It felt great winning the conference title outright,” Schutjer said prior to the game against Coe. “The past two years we had to share the title with Coe, which meant we had to play the conference championship game at their place.  It’ll be nice to have home court advantage this year in the conference tournament.”

“Winning the conference championship outright was a great feeling, knowing we were the only one with a trophy cutting down the nets,” Elbert said. “Last year was a little bitter sweet knowing that Coe was having the same celebration we were.”

The Wartburg Knights came to Indianola on Feb. 23 looking to upset the Storm’s chances at the postseason title as well.

Junior Abi Weidemann, who scored 22 points for the Knights, gave the Storm all they could handle down to the stretch with the Storm trailing by as much as eight points in the second half and found themselves down seven with less than four minutes left.

The Storm had a simple approach to make the comeback at the end of the game.

“The last few minutes we focused on getting it inside and Kate and Stacey capitalized,” Elbert said.

The dramatics began for the Storm with a steal by junior Kelsie Reeves who pushed the ball to Nielsen who knocked down two free throws to tie the game at 63. A turnover forced by junior Cathy Kain on the next Knight possession led to a go ahead layup by Schutjer.

“I wouldn’t say I was nervous, more like an anxious feeling,” Kain said, “I knew we were going to win the game, it was just a very nerve-racking end.”

If the women win on March 2, they will advance to a game on Saturday, March 3 with time and teams to be announced.