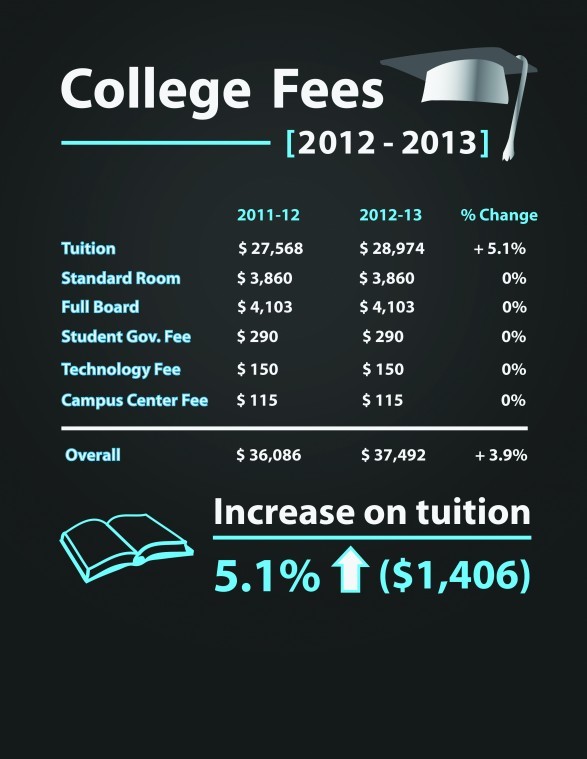 This will make the overall cost of attending Simpson College approximately $37,500, a 3.9 percent increase. This was made known to the student body last week in an email from Simpson College President John Byrd.

The amount in which the budget is increased depends on several factors.

“Taking a look at the budget for the coming year determines our percent of increase,” Byrd said. “We have to figure out what it would take in order for us to keep the quality here that our students are accustomed to. We want to make sure we have the funds to maintain the Simpson experience.”

Standard inflation, increasing energy costs and the drop in enrollment are major factors driving up the cost of tuition. Other factors include the payment of employees, maintenance and addition of new facilities

“A good bit of this 3.9 percent increase is purely inflationary,” Byrd said. “Every year we see this creep up of costs. Some years it is food prices, other years it’s energy prices. The biggest piece of tuition increase simply comes from inflation.”

There is also a systematic procedure in place that helps the administration analyze what needs to be changed in the budget.

“I have an excel budget model that I have developed over several years,” said Ken Birkenholtz, vice president of business and finance. “Here we are always plugging in different scenarios and trying to look at what seems like a reasonable mix of things that will cover our costs.”

Even though this increase seems to be a necessary evil, students will be impacted significantly.

“I moved off campus to save money and plan on graduating a semester early as well,” junior Maggie Grenko said. “Hopefully this will have saved me some money in the long run. For other students, even the potential ones, they might start looking towards other schools, such as public universities.”

Once thing to keep in mind is where Simpson College stands cost-wise compared to similar institutions.

“We looked to see what other schools like Coe, Central or Wartburg are doing,” Birkenholtz said. “Our tuition was 10-12 percent below the average group, and our room and board was higher, so we altered accordingly. It’s just a matter of competitive market forces.”

Birkenholtz also has to factor potential student enrollment into the mix. This is difficult because it is hard to budget the exact number of students that will be in attendance each semester.

“We budget with a reasonable level of student enrollment,” Birkenholtz said. “We just don’t know how the exact number of students to expect next fall and spring. We took a conservative approach to our budgeting this year given the fact that last year we did have a bit of a dip.”

Work has been done to keep the costs of attending Simpson as low as possible for students. Birkenholtz said that for the past two years staff has kept their salary at the same rate, and plans are in the works to keep energy costs as low as possible.

“We are interested in keeping Simpson strong,” Byrd said. “We always work to find revenue streams or bring in unrestricted money to keep costs low. We understand that higher education is a costly proposition. I think that what students should focus on the value behind that cost.”