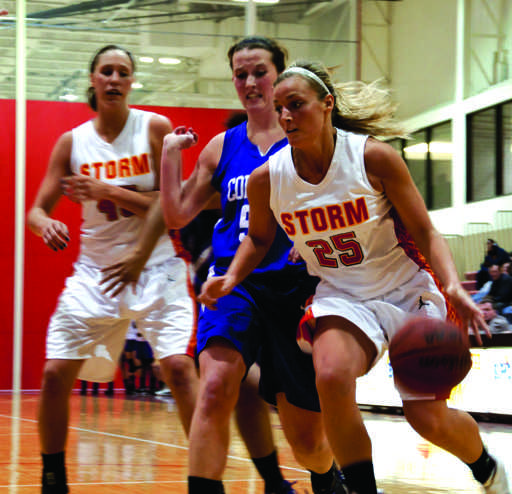 Simpson College’s women’s basketball team lost 69-61 to Wis.-Eau Claire in Chicago on March 2 for the first round of the post-season tournament.

“This is a defensive pressure put against their offense which brought momentum to us offensively,” junior guard Kelsie Reeves said. “We were very enthusiastic on the court.”

This helped keep the Storm on their toes and aware of their positions on the court.

Head coach Brian Niemuth said he was proud of the way the girls played.

“The girls played with enthusiasm and were always making the extra pass towards other players,” Niemuth said.

During the game, the team came across a “tall problem.” Eau Claire’s Ellen Plendl, a 6’5” senior, used her height to her advantage and stopped opportunities for Simpson. Simpson only scored 12 points in the paint compared to Eau Claire’s 32.

“The team couldn’t score well because of the girl being this tall,” Niemuth said.

Despite this obstacle and the eventual loss, the players and Niemuth focused on enjoying the game and learning from the experience.

“Coach told us to play like it’s our last game, have fun, work hard and relax at the same time,” Reeves said.

The team wasn’t in Chicago for very long, so all of its focus was on playing its best while on the court. The Storm didn’t have a chance to travel around the town of Chicago, but that helped keep them mentally focused and tough on the game.

The team attributes its success this season to all of the team bonding experiences the players shared in the preseason, something the returners and incoming freshmen will experience next year.

The team will come back with nine seniors and 15 freshmen.

“One of the toughest challenges the group is going to face next season is getting all of the girls on the same page that the coaches want,” Niemuth said.

Overall, the team considered the game was a success even though the win didn’t happened.

“Everyone played really hard, and there were no moments within the game that any of the players gave up,” Reeves said.

The players believe that the effort was there, but it just wasn’t enough to grant the success in the end, and the expectations for next season are high.

“I really think we can win conference, make the NCAA and go farther than this year,” junior guard Kara Engebretson said.