Boy band are back with One Direction 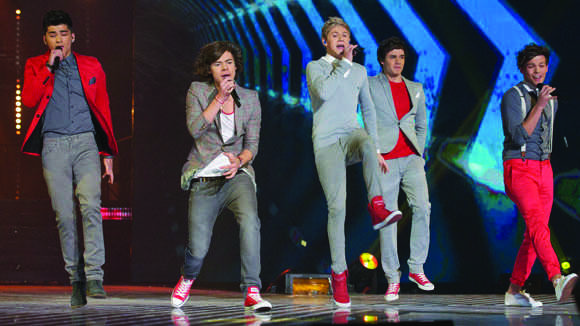 “Baby you light up my world like nobody else.”

I’m guessing many of you have probably heard that lyric being played on various Top 40 radio stations recently. It’s from the song “What Makes You Beautiful” by British-Irish boy band One Direction, whose first album “Up All Night” dropped on Tuesday, March 13 here in the U.S.

If you want to know a little bit about the guys, there are five of them in the band: Harry, Liam, Louis, Niall and Zayn. They’re all under the age of 20. They all tried out individually for Britain’s X-Factor, only to be told by Simon Cowell and the other judges that they would work better as a group.

They just finished up their first tour here in the U.S., as an opener for Nickelodeon boy band Big Time Rush, and they have a predominantly female fan base.

As you could probably guess from that information, their genre is pop rock, and nearly all of their songs pertain to relationships, love or heartbreak.

“Up All Night” features 13 songs on the actual CD, with two bonus tracks and an LP available from the Deluxe Album on iTunes.

The first song is their first U.S. single, “What Makes You Beautiful”, which has over 70.5 million views on YouTube. It is an irresistibly catchy song that has even made it into many guys’ iTunes playlists, although not many of them will probably admit to it.

“Gotta Be You” is the next song on the disc, and the first ballad, as well as the band’s second UK single. It predominantly features singers Liam and Harry, the latter whose falsetto is what holds the chorus of the song together.

Other power ballads on the CD include tracks four and six: “More Than This” and “I Wish.”

Track number three, “One Thing” has also been released as a single. It is one of the up-tempo songs found on the CD.

Only three of the songs on the CD were co-written by the band. These include tracks eight and 11, “Taken” and “Same Mistakes” the other two power ballads and track 10, “Everything About You.” Track number seven, “Tell Me A Lie” was co-written by American Idol’s first winner, Kelly Clarkson, and “I Want,” track number nine, was written by Tom Fletcher, member of the British band McFly.

This is definitely an album I would recommend spending the $10 on. If you feel a little hesitant (all you guys out there) check it out on Spotify first.

It is a perfect CD to rock out to with the windows down on a gorgeous spring or summer day. Or, if you’d rather, pick up the deluxe copy on iTunes and get the bonus tracks. One of the tracks, “Moments” is a personal favorite of mine.

But I promise you, there is at least one song on the CD that you won’t be able to stop singing. So give it a listen.