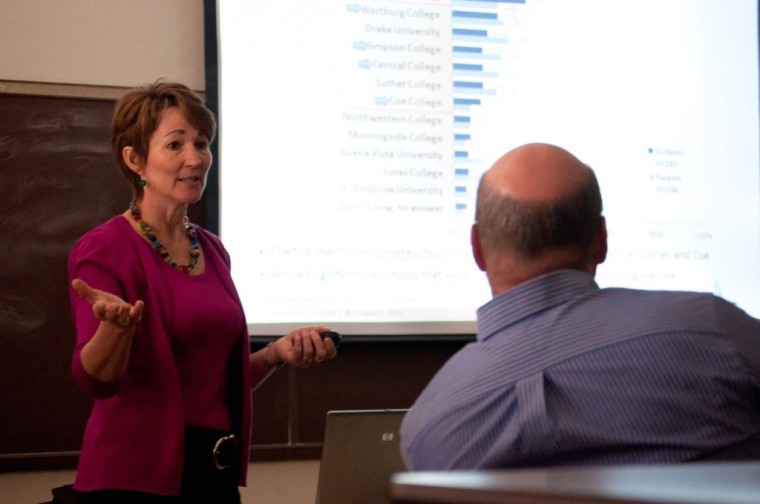 by Kinsey Bak and Chelsea Winegard

Jill Johnson, executive director of marketing and public relations, worked with Statmats Research to build a questionnaire to survey potential students and parents around Iowa. The company contacted 500 Iowa residents, 300 students and 200 parents to find out where Simpson stands in specific categories.

Simpson had four major objectives going into the survey:

After conducting the survey, Johnson said she found that parental involvement was a key part of the recruitment process.

“If we are not recruiting to parents as well as students, we are missing half of the equation,” Johnson said. “It’s really important, and you guys as faculty know in talking with parents as part of the recruiting process – they have different ideas on what’s important. And just understanding what those are and why it’s important to address those with parents because of level of involvement.”

Throughout the survey, Johnson found that cost was not as high on the list of importance as it was originally thought to be.

Although the cost of tuition wasn’t the biggest concern for parents and students within the survey, most people have the perception that private colleges are less affordable than the larger public schools.

“Parents probably three times this year have said ‘we love this place but there is no way we can afford it,’” said Fred Jones, professor of sociology and criminal justice. “I think we just do a terrible job of helping students understand the average debt that students have when they graduate from Simpson is much like it is at any of the state universities. I don’t know how you do that exactly but we need to get that message out to parents and students. They look at the tuition cost in the catalog and they think that’s what they’re going to pay.”

Brian Steffen, professor of communication studies, gave his input on the issue.

“The average student ends with more debt than our kids do,” Steffen said. “And that has been my message to every single kid I have talked to since then and the parents are flummoxed. We are only about $200 above the University of Northern Iowa. Partly is because we get a lot more aid and partly you’re going to get done. You’re going to be in Ames or Iowa City five or six years and I think that is really something we’ve got to push.”

Johnson found that during the survey there was confusion in the difference between private and public colleges. When asked what private colleges and universities came to mind in the state of Iowa, their first three answers were: Iowa State University, University of Iowa and University of Northern Iowa.

Johnson discussed with the faculty members that it is important for potential students and parents to understand the difference between public and private colleges.

“This is an indication that we need to think differently on how we manage their expectations,” Johnson said. “We can’t necessarily assume that they know what a private college means. Maybe they don’t know that. I would guess maybe they don’t recognize the difference.”

Out of the private colleges that were recalled by the people in the survey, Simpson was third on the list behind Wartburg and Drake.

Johnson said that she was pleased to see Simpson as one of the top schools to be remembered by the participants, but there is still some work to be done so that students know what the benefits of choosing Simpson College are.

The next step is to make Simpson’s brand stand out to potential students and parents, Johnson said.

“Brand is all about an emotional attachment, think about the products that you buy that you’re loyal to the brands that you go back to again and again, there is sort of an attachment there that you may not even be able to articulate,” Johnson said. “But what we need to begin to develop is some sort of an attachment that people can grasp on to for Simpson. It’s all here we just need to somehow funnel it so they can get ahold of it.”