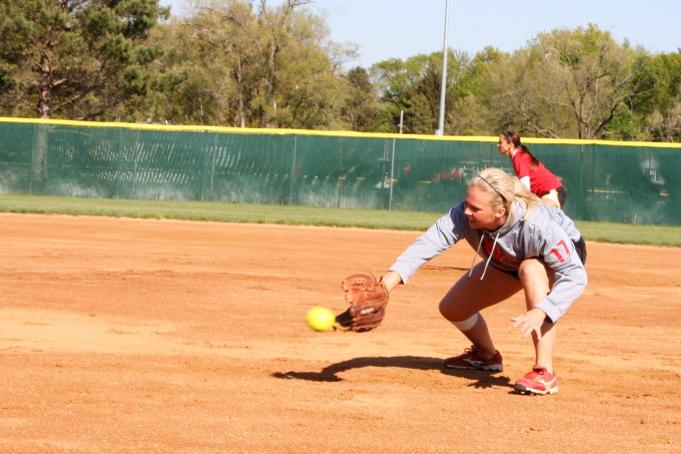 Head softball coach Henry Christowski said he is happy with the team’s performance this season.

“Our current, overall record, is 23-9,” Christowski said. “I’m feeling fairly good about it. With the type of competition that we scheduled, that’s a very good record.”

The softball team has played Division I and II schools this season among many other Division III schools in the conference.

“This season we’ve been doing really well,” junior outfielder Chelsea Winegard said. “We started out in Michigan and went 3-3.”

During spring break in Florida, the team went 10-4.

“Coach said our schedule was one of the toughest schedules he’d seen since we’ve been there [Florida], so we did well with what we were set up with,” Winegard said.

Winegard has fond memories about playing against the tougher competitors.

“My favorite memory is when we beat the Division I team when we were in Florida,” Winegard said. “That was a huge accomplishment for us since we’re a Division III school.”

Christowski said he also enjoyed the win over a Division I school.

“Our win over the Division I South Dakota was really a fun or pleasant memory,” Christowski said.

The team also played against a ranked team, which they found to be a huge accomplishment.

“We also beat a team by the name of Trine University,” Christowski said. “They were a ranked team and probably one of the better teams that we had a chance to face, and we handled them pretty well.”

The team is very happy about splitting the double header with Luther this season.

“My favorite memory this season is beating Luther in a conference rival,” junior pitcher Jessica Toyne said. “They are also ranked fifth in the nation. That was a huge accomplishment for us as a team.”

“We were tied with Luther for first place in the conference,” Christowski said. “We had split with them in the double header we played so we were on equal ground as far as the conference title was concerned.”

Since then, the team has lost against Dubuque, which has given Luther one more win to put them in first place for the conference title.

Losing against Dubuque was a huge upset for Simpson.

“It’s kind of frustrating to know how good we are and as well as we did in the first game and then kind of fall apart the second one,” Winegard said. “Now that it’s over with, we can forget about it. It’s a loss on our record, but it’s something we shouldn’t dwell on, because we know that’s not how we play and we can do a lot better than that.”

The team doesn’t have many games left before the tournament, and Christowski is looking ahead to plan for the conference title.

“We still have two more real tough conference competitors [Coe and Central],” Christowski said. “I don’t want to discount any of the rest of the conference members that we have to play, because all of them can come up and bite you when you’re not looking.”

Toyne expects big things the rest of the season.

“I expect us to play well and to pull out some huge wins the rest of the season,” Toyne said. “Now that we know what it’s like to get killed, we never want to feel that again.”

Win or lose, Christowski has enjoyed every minute of the season.

“They’ve been a fun group to work with because they do work hard,” Christowski said. “They get along and they do compete well. It’s really been a fun season.”

The team hopes to make it to Regionals during the second week in May. Nationals will be hosted the following week.