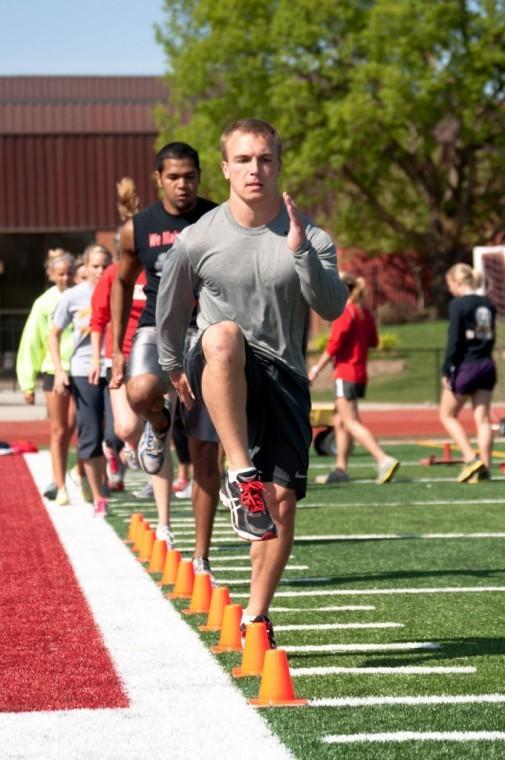 by Kelsey Hagelberg and Chelsie Rohrs

The Simpson College track and field team is up and running, taking advantage of the great weather and brand new track.

“We want to develop our team in a well developed manner and help each individual work to their full potential,” head coach Dave Cleveland said.

The track and field team had its third meet at Loras on April 4 and had 23 top performances. The women were champions in three events with senior Kinsey Bak winning the javelin and the triple jump and freshman Bailey Fleshner taking the 100 hurdles.

On the men’s side senior Ben Coy won the 400, sophomore Brad Vogel the 100 and senior Ryan Edwardson ran a personal best and placed first in the 5k run.

After this recent success, there are still several things the team wants to improve.

“We work on the same things for every meet: getting fast time, better handoffs in relays and improving on throwing events,” junior Brandi Schindel said.

Cleveland said he was proud of both teams and the effort they gave at the meet.

“We just went there and a lot of kids had multiple events they were working on,” Cleveland said. “Everyone stayed very busy and did their thing and overall had a really good meet and a good performance.”

They teams’ focus this year is on keeping people healthy, preparing the athletes physically and mentally, having routine exercises and maintaining confidence.

“Some key components in our training are staying focused, working hard and using every practice as a competition to get better,” sophomore Shelby King said.

These techniques in their preparation will allow the team to continue to reach their goals both as a team and individually for their next meet and ultimately for the rest of the season. Though there is team scoring, each individual has his or her own personal goals set to achieve.

The Simpson Track and Field team will be in action again on April 13 and 14 for the Jim Duncan Invitational at Drake Stadium. This meet is a two-day deal with each day consisting of competitors participating either one day or both days.

The races the team foresees being most competitive are the 1500 with senior Catie Ellingson, 100 hurdles with Fleshner, hurdler freshman Sammi Nelson, high jump and hurdles with Bak, and the 5k with Edwardson.

“We are getting ready for our home meet at the end of the month on April 27, which will allow us to perform in front of friends and family,” Cleveland said. “We are also getting ready for the Drake Relays, which puts ourselves in position for the first week in May, and then to look into the second week which puts us into conference championships.”

Cleveland said every team has an equal opportunity to compete at a high level, which puts the title up for grabs and makes the conference hard to predict.

“Anyone in our conference is certainly a rival,” Cleveland said. “We try to do what we can do that can make ourselves better, and if we feel we perform at the highest level for us.”