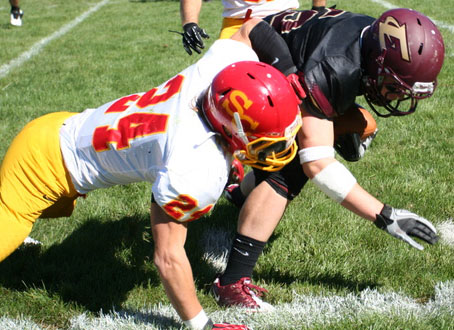 The biggest worry coming into Saturday’s game against Eureka for Simpson was how to slow down Eureka quarterback Sam Durley. Not only did they slow him down, they put the Red Devil offense to a complete halt in a 54-0 win.

Nothing, however, could stop the Storm. Not even on the opening kickoff.

Senior Brad Vogel started things off by taking the ball back 93 yards to give the Storm an early lead. From that point on, they never looked back.

In their next five offensive possessions, the Storm drove down the field and found the end zone each and every time.

Quarterback Taylor Nelson put in the second touchdown on a one-yard run that capped off a 12-play, 75-yard march down the field. On their next possession, Ethan Calvert ran the ball in from the seven-yard line with 12:08 left in the second quarter making the score 21-0.

The next three drives in the second quarter only lasted a combined nine plays and scores all came from the arm of Nelson. In order, Taylor Rogers caught a 20-yard pass, Vogel hauled in a 40-yard TD reception and to end the half, Jered Bevins got involved with a 5-yard TD reception.

At that point, the score was 40-0. Simpson would tack on two more in the third quarter to rain on Eureka’s parade.

On the afternoon, Nelson was a perfect 9-for-9 with 185 yards and four touchdowns. Calvert ended with 56 yards, but Michael Chia led the Storm with 58 rushing yards.

Simpson ended up with 452 total yards against Eureka’s 152 cumulative yards.

While the offense was lighting up the scoreboard, the defense unplugged Eureka’s offensive power.

Sam Durley had the title of the most passing yards of any level in the NCAA coming in. Simpson’s defense didn’t care about that. Durley threw for 129 yards and had a frustrating first day of fall going 15-for-32.