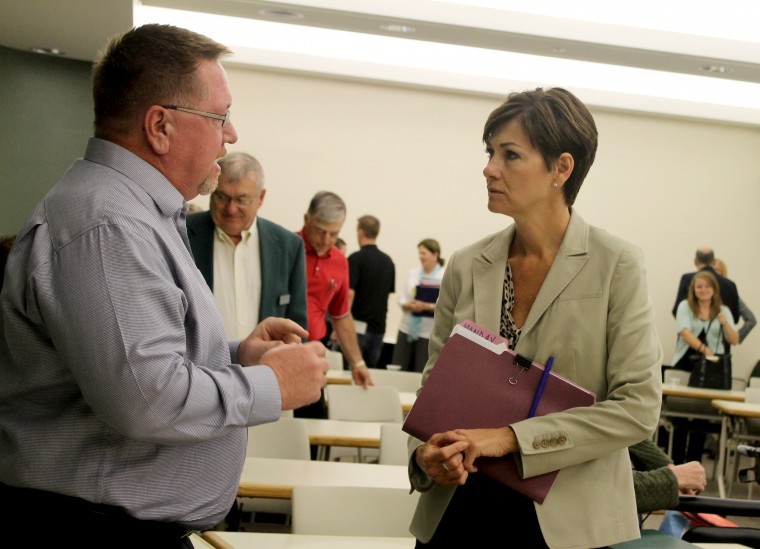 Simpson College hosted Lieutenant Governor Kim Reynolds on Monday as she traveled the state to promote the STEM Education Initiative, which looks to improve the education of science, technology, engineering and math.

The town hall-style lecture was open to students and community members alike, and faculty and staff from Indianola Community Schools and Simpson were in attendance, including President John Byrd.

“The initiative is really about innovation…it’s about growing jobs, it’s about closing the achievement gap, and it’s about inspiring our students to embrace STEM fields so that they really have the key to their future,” Reynolds said.

Reynolds is holding STEM community meetings with Governor Terry Branstad and University of Northern Iowa President Ben Allen across the state. Branstad and Allen were both unable to attend Monday’s event at Simpson, so Reynolds gave the address in Pioneer Conference Hall alone.

According to Reynolds, STEM fields are projected to grow at a much faster rate over the next few years, 18 percent compared to 10 percent in non-STEM related fields.

The STEM advisory council, which Reynolds co-chairs along with Allen, was established in Sept., 2011, by Branstad to make Iowans more competitive in the job market. The Iowa legislature appropriated $4.7 million to the initiative last year.

Last May, the council announced that six regional STEM network hubs were created and would each receive $500,000 for first year operation. The hubs, which are located at area colleges, are designed to help bring STEM programs to local schools and nonprofits in their assigned area and are tasked with seeking additional private funding from businesses in STEM-related fields that would from the investment in STEM education. Indianola’s area hub is located at Drake University.

Schools and nonprofits can apply to receive a grant for programs put on by the hubs for their students.

“Our goal was to get about 300 nonprofits or schools to apply to receive a grant to deliver these programs. As of Friday, we are at 870 individual school districts and after school programs that have applied through this process,” Reynolds said. “I think that really speaks to the need for STEM education.”

The program looks to measure success based on the number of college students who complete undergraduate and graduate degrees in STEM majors. The numbers will tell the council in the coming years whether the STEM initiative is successfully drumming up enough interest and skills in elementary through high school students to affect the amount of people in Iowa’s workforce who chose to go into STEM-related jobs.

So far, the program has been alluded to by other states as an initiative worth watching. Reynolds described attending the National Lieutenant Governor’s Conference this summer and sitting in on a panel discussing workforce and education issues.

“They highlighted Iowa for our STEM Initiative as well as our Skilled Iowa initiative as two programs to watch and emulate in your state because it looked like they really were programs that were doing the right thing. We’re leading the nation,” Reynolds said.

“It’s critical that we continue to do a better job on preparing our students for STEM careers. I am confident with this kind of interest and energy and turnout that we have seen that we’re going to make great progress in the next year,” Reynolds said.

More information on the Iowa STEM Education Initiative is available at www.iowastem.gov.