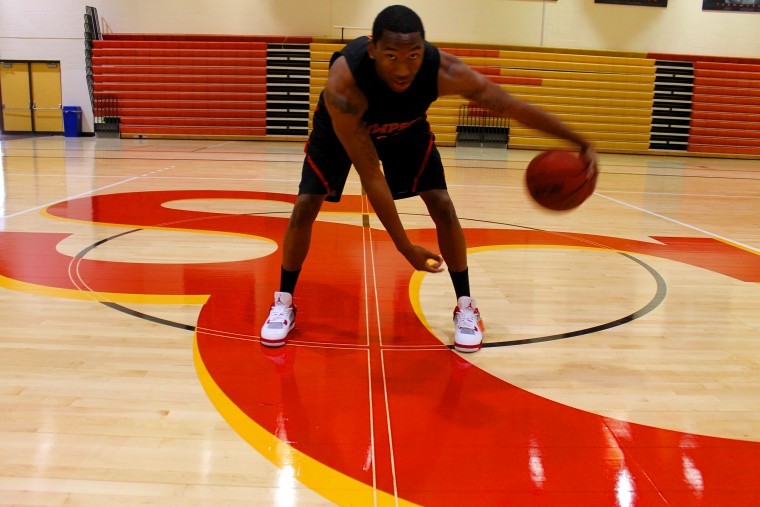 In with the New, Out with the Old by Brett Crable

Cowles Fieldhouse, which is used by the public as well as the Simpson College student body, has a new floor that college officials say will create a safer athletic space.

It had been over a decade since the fieldhouse was expanded or any other changes made. Simpson officials decided that it was time to redo the floor among other changes occurring around campus, including the renovation of the McNeill Hall plaza.

Among those around campus excited to have the new floor, which was salvaged from a warehouse fire, is head men’s basketball Coach Charles Zanders.

“I am just thrilled to have it, it is like a kid in a candy store,” Zanders said.

Ken Birkenholtz, vice president for business and finance, was happy with the decision to install the new floor, which came to a total cost of $48,000.

“The cost of the new floor was $48,000, and we had a donor who covered about half of that cost,” Birkenholtz said. “Our research indicated that a new floor comparable to that would be about twice that much so we were very pleased with the acquisition.”

The old floor in Cowles was beat up, leading the Simpson administration to do away with the worn floor for safety reasons.

“It had lost some of its liveliness and needed to be replaced,” John Sirianni, Simpson’s athletics director, said.

Senior guard for the Simpson men’s basketball team, Elijah Knox, was not disappointed in the acquisition of the floor either. He believed there were advantages to having the new floor.

“As far as durability, because it has a little bit of bounce to it, and just excitement because we get to fly a little more,” Knox said.

Sirianni, who played a significant part in the floor’s installation, believed the old floor was a mess and thought Simpson was at a disadvantage compared to other Iowa Conference schools.

The new floor gives Simpson some edge and creates a strong vibe throughout the campus, he said.

“It is safer, it will enhance the quality of play, and from an aesthetic point of view it really dresses up the facility,” Sirianni said.

The first varsity squad who will get to play will be the volleyball team this weekend during the Simpson Invitational .