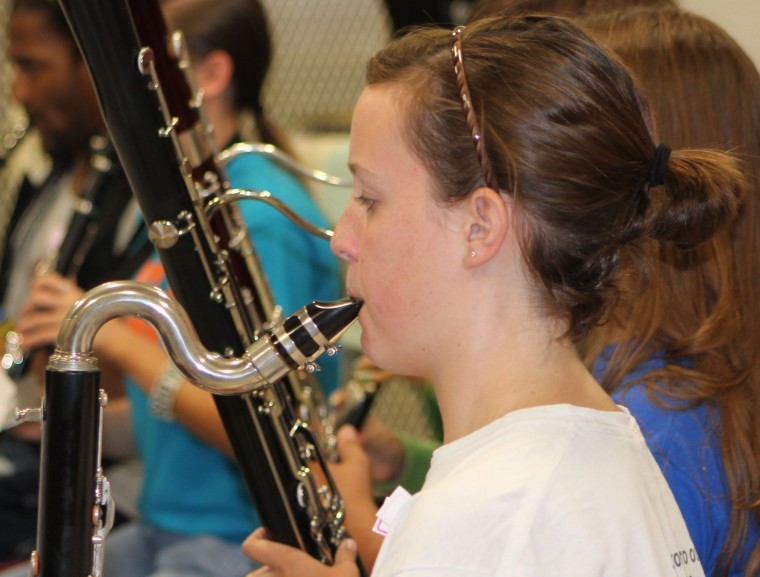 The Simpson College orchestra began its first practice Sunday in the Amy Robertson Music Building. The new orchestra practices in Harris Hall from 6:30 p.m. to 9:00 p.m.

Directing the orchestra is Dr. Mike Eckerty, director of music ensembles. The orchestra is not just for Simpson students, it’s also open to faculty and members of the community.

“It has always been set up from the beginning with the intention that the string section would be open to community members as well as Simpson students and faculty,” Eckerty said.

“This orchestra allows you to play in more then just a small group,” sophomore violinist Jesse St. Clair said. “You’re getting to play with professionals and high school students which allows different levels of musicians to come together and make a beautiful sound.”

Indianola resident James Haddox, and cellist, is very excited to get to play in the Simpson orchestra. Haddox was a cello major in college but did not continue playing once he graduated.

“It’s easy to find groups to play with while you’re in college but once you’re graduated it’s not,” Haddox said. “So I was very excited when I heard this group was finally coming together.”

Kara May, violist and assistant director of Hawley Academic Center was equally as enthusiastic about the first rehearsal.

May believes this program will be an asset to the music program Simpson currently offers.

“This orchestra was very needed and will really help enhance the program here,” May said.

Students that are enrolled in the orchestra are able to take it as a one-credit course like band or any other instrumental ensemble.

“I’m excited and a lot of students are excited,” Eckerty said. “I had a student talk to me that wants to be involved in the orchestra that hasn’t been involved in music here at Simpson because there hasn’t been an outlet here for her.”

This program offers students who have a passion for music the opportunity to be involved in ways that were not offered in years past.

“The Music Department embraces the opportunity for students who play stringed instruments to participate in an ensemble on campus as well,” Department Chair of Music Tim McMillin said.

The orchestra already has one performance set for Nov. 18 in Great Hall at 7 p.m.