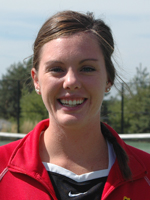 The Simpson Storm Women’s Tennis team was back at it again on the court Saturday morning to take on Morningside.

They were looking to continue their streaky success to push their winning streak to six matches in a row.

Senior tennis player, Lindsay Nash, believed that last week one of the improvements that needed to take place was better doubles play for the Storm.

“I think we are going to be pretty close on some other matches so I think that really making sure that we get our doubles matches started off strong is going to be really important,” Nash said.

The Storm beat Morningside 5-4 thanks to some strong doubles play to start out the match. While it was a highly competitive match the Storm were not going to let down and kept on grinding to the finish.

Senior Tiffany Bost had to deal with cold weather and wind, but that didn’t stop her from winning. She won her doubles match as well as her singles match while having to deal with the weather on the first day of fall.

She was happy with her performance and is looking forward to Wartburg next week.

“Wartburg will be tough this year so we are going to have to bring our A game and start out hard in the beginning,” Bost said.

Head Coach Lindsay Chase was overall satisfied with the team’s performance considering the weather and getting off to a little bit of a slower start than she would have liked.

“When it got there at the end when the match was on the line and we were in two super breakers we stayed tough and won the match,” Chase said.

In the second match against Grandview on Saturday, Simpson had no troubles against the Vikings. In what was one of the premier matches of the afternoon, Bost faced former Simpson athlete Jennie Darrow, and Bost had no problems beating Darrow 6-1, 6-0.

Only one set was lost by a Simpson player, and that was in the match involving Nicole Gilbert facing Katie Victor. Gilbert dropped her first set, but came back to win 12-10 in the third set.

The Storm will pick up next weekend, Saturday, Sept. 29, when they will face off against conference rivals Luther College at 9 a.m. followed by a match against Wartburg College at 2:30 p.m.