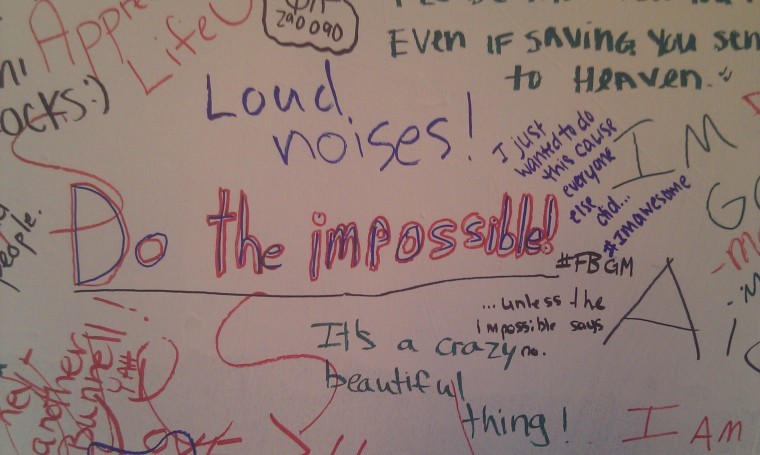 Initially, students thought it was out of place.

It was big, and for a while, it was white. Until the temptation to cover it in Sharpie scrawling was too much to bear, that is.

The Constitution Day wall, standing proud between Dunn Library and Mary Berry Hall, was hosted by the Simpson Student Media team with one intention: to let students say whatever the they want. Media students stood by handing out Sharpies to anyone who walked past or looked their way, urging students to write whatever came to mind, and did they ever.

Lots of students wrote relatively harmless things- “Pizza”, “You’re a wizard, Harry”, and “I’ve got your back” were a couple examples.

Some students weren’t so kind. Slut accusations, alcohol claims and religious intolerance were present on the free speech wall, some of it small, and some of it large enough that no one could miss it.

Claims denouncing Islam and Christianity, especially, were very obvious and uncomfortable for some who were reading. Still, as riots broke out half a world away over an anti-Islam film supposedly created by a U.S. Christian, the wall served as a timely reminder of the right to free speech in our nation.

Iranian president Mahmoud Ahmadinejad has recently claimed that the right to free speech comes with the responsibility to never say anything offensive. While this staff does not condone videos like the YouTube clip, the truth is that freedom of speech means absolute freedom.

Ahmadinejad has the right to be offended. We all do. Luckily, the freedom of speech gives us the right to stand up for our beliefs against the critics.

Live out your life. Say what you stand for. It’s your Constitutional right.