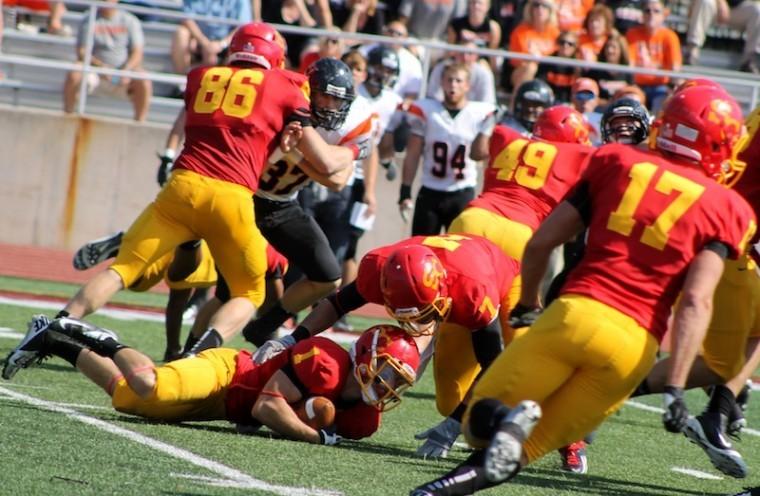 No, this is not an old article from the 2011 season, Simpson football held off Wartburg again by blocking a PAT, but this time around in 2012 the score ended out 20-19.

“It was so eerily similar to last year,” Mark Cronin said, senior linebacker for the Storm. “The only big difference is this year was regulation and last year was overtime.”

The Storm tied it up at 13-13 with 4:24 left in the game, which gave Wartburg more than enough time to try and take the lead.

T.J. Alger, senior cornerback, intercepted a pass from Wartburg quarterback Logan Schrader, which gave the Storm the ball on their own 32 with 2:51 left.

Simpson quarterback Taylor Nelson led the team down the field as they drove 68 yards for a touchdown on a 43 pass from Nelson to senior wide receiver Taylor Rogers.

“I just kept saying we are going to win this game,” Nelson said. “During that last drive I just had no doubt that I was going to get my guys the ball.”

Nelson certainly did get the ball to his guys. Nelson was 29-51 for 434 yards and completed passes to nine different receivers. Two of those nine, Rogers and junior wide receiver Brad Vogel, had over 100 a piece. Rogers had 136 and two touchdowns, and Vogel with 197 with one touchdown.

Junior wide receiver Ryan Olson said the team listened to coach Jim Gloglowski’s words “if you wait, the game will come back, you just have to let it.”

“We just kept thinking about that and being patient and wait for our moment and then seize it,” Olson said. “T-Rog (Rogers) made a huge catch to give us the lead.”

Olson had two catches for 26 yards including a big catch to give the Storm a first down on their last scoring drive.

After the touchdown by Rogers, the Knights got the ball with 1:38 left and charged down the field 83 yards for a touchdown.

. Knowing how the previous meeting between the two ended, a blocked kick in overtime giving Simpson the win, no one was taking this PAT for granted.

“I told the guys in the huddle during the timeout that we’ve done this before,” Head Coach Jim Glogowski said referring to last year’s clinching block.

The kick was up, but not for long, as Rogers came up huge again for the Storm getting a hand on the ball and denying the Knights a tie game.

The Knights try an onside kick but the Storm recover with :35 left. They run the clock down to 22 seconds remaining and then were forced to punt. Wartburg got the ball but couldn’t manage a score as Simpson held on to their lead to beat the Knights two years in a row.

“It is an incredible feeling whenever we beat them,” said senior wide receiver Billy Weathers. “They are a huge rival and they think they are superior to us and better than us in every aspect, so it just feels good to make them drive home after a loss. We just stayed focused and stayed locked in and got the score.”

The next game for the Storm is at Central Saturday, Oct. 6 at 1 p.m. where they take on another conference rival the Dutch.