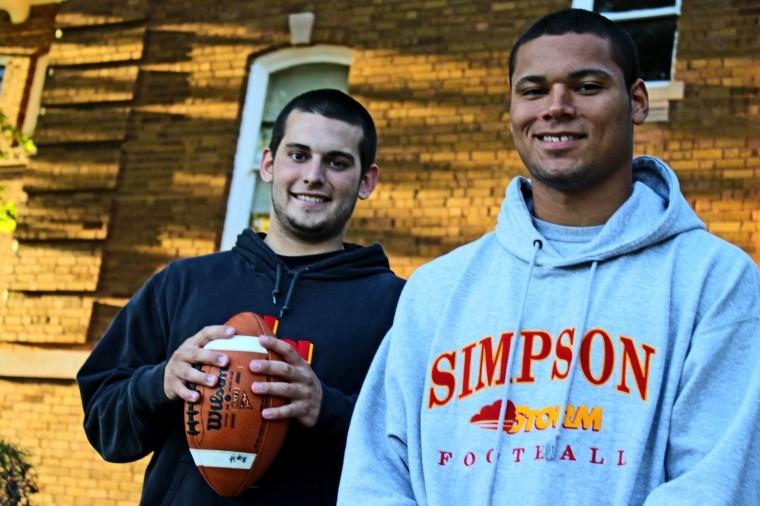 They are not just teammates. They are best friends both on and off the gridiron.

Senior wide receiver Taylor Rogers and junior quarterback Taylor Nelson have arguably been considered as the fueling surge leading the Simpson Storm football team offense for the past three seasons.

Rogers, who garnered pre-season All-American honors at the start of the 2012 season, has already racked up 301 yards, catching 15 passes and scoring two touchdowns. The senior wide-out is averaging 150 yards a game in receptions, leading all Iowa Intercollegiate Athletic Conference receivers in total yards gained and is second in total receptions.

Nelson, on the other hand, is just as good, if not better, to his position counterparts. The junior has already amassed 839 yards with six touchdowns and two interceptions going into the bye week. He leads the IIAC with yards thrown, touchdown passes and is second for pass completion percentage of 55.3%.

Most of those passes were caught by the hands of Rogers.

“It definitely makes things a lot easier,” Nelson said. “Some balls that I wouldn’t be able to throw to anybody else I could throw to him because I know that if I give him a chance, he’s going to go up and get it.”

As many may have guessed, Nelson is comfortable going to his top receiver.

“Just knowing that when we need a play, I know I can go to him and count on him to get it done,” Nelson said.

Rogers is one of Nelson’s favorite receivers to throw to throughout his entire playing career. On the flipside, Nelson is one of Rogers’ favorite quarterbacks to play with.

“He’s one of the best quarterbacks that I’ve played with. I couldn’t ask for anyone better to have throwing me the ball,” said Rogers.

Ever since Nelson has been under center, the game has developed perfectly for Rogers. He gives all the credit to Nelson and his teammates for doing their jobs and making those honors possible, and is fortunate for that.

The two captains have not even been playing football at their positions for too long.

“We’ve kind of in a sense have grown up together when it comes to being on the field,” said Rogers.

Not just on the field have they grown up together, but they agree that they are extremely close outside the confines of Bill Buxton Stadium. The entire team is for that matter — hanging out after practices, eating meals and doing homework together.

The two Taylors also feel that they have stepped up to the plate in leading the team.

“We’re just trying to get us going in the right direction,” Nelson said.

The football team partook in voting for a few of their teammates to represent the squad within the Leadership Council, and both of them are members on the board.

“With leadership comes responsibility,” Rogers said. “We’re trying to pass down what we’ve learned and what we know to other people on the team. It’s a team game, both he and I have been fortunate enough to excel.”

The Storm’s next football game is Saturday, Sept. 22 in Eureka, Ill. against Eureka College. Kick-off is slated to start at 1 p.m.