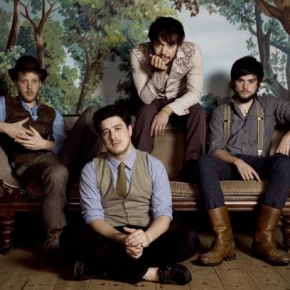 “They don’t dance. They don’t wear designer clothing. They don’t do beer commercials. They underplay and undercharge. They do everything the complainers say you cannot. And then they blow up the chart.”

According to Billboard news, the album debuted at number one on the Billboard 200 album chart, Mumford’s first, with over 600,000 sold in the first week. It was also the biggest debut of the year for any album; the only album that has sold more in a week in this year is Adele’s “21”. It is the second largest in digital downloads in history in a week, eclipsed only by Lady Gaga’s “Born This Way”.

Again from the Lefsetz Letter, “One out of ten Spotify users played a song from the album in its initial week, for a total of 8 million streams, a record.”

The Mumford CD includes 12 songs, with an extra three songs available for download with the purchase of the deluxe edition on iTunes.

Mumford & Sons has never been a band that has received a lot of media attention.

“Careers are now in the hands of the audience,” Lefsetz again said in his blog post. “That’s who spread the word on Mumford. It wasn’t a top-down media campaign, but a grass roots thing.”

One of their highlights was performing “The Cave” from their first album “Sigh No More,” released in February 2010, at The Grammys in 2011, sharing the stage with The Avett Brothers and performing with Bob Dylan.

Mumford and Sons crosses all types of barriers. Different music tastes and different ages are just a few of these, along with crossing the barrier of the Atlantic Ocean; the band is originally from London. Both college students and their parents can find appeal in the music, and the message and hope that can be taken from so many of the songs.

“Mumford and Sons speaks to you when you need it most,” sophomore Dylan DeJong tweeted.

One of the songs with an uplifting message is Ghosts That We Knew. With lyrics like “so give me hope in the darkness that I will see the light,” many people can find something to relate to, along with the songs in the rest of the album.

Make sure to give it a listen on Spotify, or give it a purchase on iTunes.