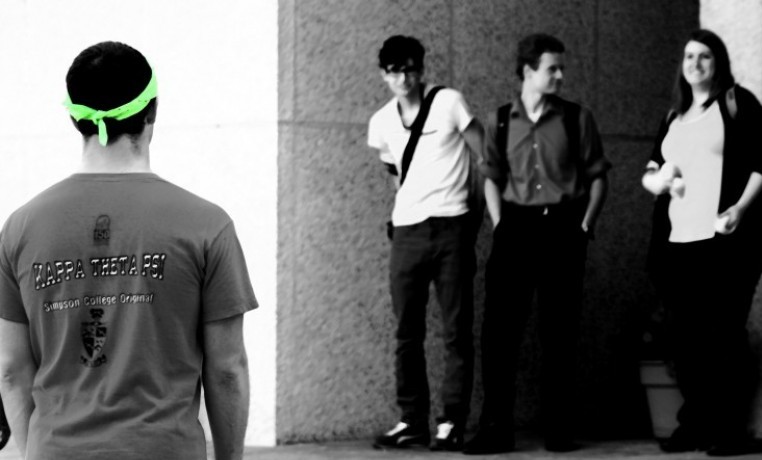 “I’m sure people that have no idea what’s going on just think this is ridiculous,” junior Mike Henry said. “A random person walking and suddenly people are chasing them and they’re throwing socks. The game looks really weird and I know that people in the Indianola community think it’s really weird.”

Peoples’ views of the game don’t stop Henry from enjoying every part of the tradition of Simpson College’s Humans versus Zombies (HvZ).

“I’m sure people judge the players, but they just don’t know what they’re missing,” Henry said.

For Henry, it’s more than just a version of cat and mouse.

“It’s a game of tag with a lot of flavor,” Henry said. “It almost brings you to back to when you were in elementary school running around playing tag and how that seemed like that most fun thing ever. Now it’s fun to be able to be in college as an adult and still run around chasing people, and throw socks and have a lot of fun.”

More than usual and roughly ten percent of campus, about 160 students took on the thrill of the game last week.

Henry has participated in HvZ since his freshman year when some of his friends were playing and he viewed the game as a good way to get involved and meet people. The game seemed fun to him, his interest of zombies helping this.

“I mean who doesn’t like zombies,” Henry said. “My friends or I will talk for hours about what we’d do during a zombie apocalypse and discuss the different types of zombies. It’s just something fun to think about.”

Simpson’s week long apocalypse starts with one zombie and is a slow process of eventually more zombies working together to tag the humans, with random ‘missions’ throughout the week and the final mission on that Friday.

Humans can defend themselves by running or hitting a zombie with a sock, which makes them stunned-they can’t tag anyone for a certain period of time.

The rules can change in the final mission and it’s the chance for what little humans are left to be rescued and essentially win the game.

Humans wear their bandana on their arm; zombies on their head.

“It’s kind of like taking all the zombie movies that you watch and you’re sort of reenacting them,” junior Michael Frank said. “It’s fun to get out and play with your friends.”

Henry sported an orange bandana this year, meaning he is one of the administrators for the game, the web master.

Senior John Warnke was also an administrator, serving as the president of HvZ, with his experience of playing all of his past years at Simpson.

“I love the high stress situations and adventure of it, but I really enjoy just getting to know people; you get to know so many different people since they’re not all from one group,” Warnke said. “The game brings together a lot of groups. We have a lot of experience that we’ll talk about for the rest of the year and following years.”

Ironically, zombies are out to break down the human population, but at the same time the game itself is what is bringing humans together.

“You sort of form a bond when you’re trapped inside of a building together and have to figure out a way to escape,” Henry said.

The friends and memories all come with having fun and potentially experiencing near death experiences from zombies throughout the week.

“You’ll be walking and you’ll be noticing that you’ll be constantly checking corners,” Henry said. “You have to make sure you’re aware. When you hear footsteps, you get your socks ready.”

Being paranoid is a natural instinct for a human to feel during the week.

“Typically one zombie isn’t a big deal. You can sock them,” Henry said. “When it’s three zombies, suddenly it’s a lot more scary and you have to figure out what to do.”

Like many others, Frank changes his routes around campus as a human.

“I take routes around the football field and I try to get to the edge of campus to get back to my room,” Frank said. “Being a zombie is a lot easier because you don’t have to watch your back all the time, but it’s a little more thrilling to be a human.”

When you turn from a human to a zombie the game isn’t over, your role just changes. Henry’s favorite part is walking around as a zombie stalking humans.

‘It’s funny to be halfway across campus and see a human and they see you and they just take off running,” Henry said.