Benefit puts the fun in fundraising 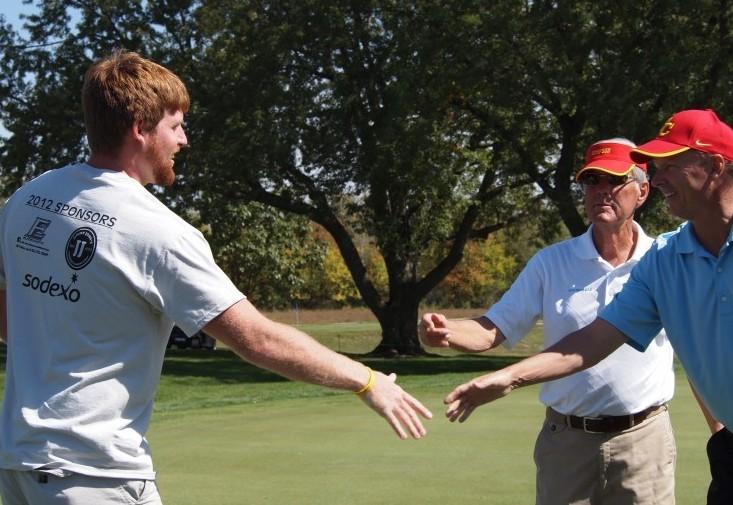 An amazing day at the beautiful Echo Valley Country Club in Norwalk was more than the perfect way to set the tone for the twelfth annual Simpson College Wayne Carse Athletic Benefit Thursday afternoon.

Alumni, coaches, administration, businessmen and women with ties to the college arrived to the scenic, luxurious golf course for a 12:30 p.m. tee-time and shot in 18-hole Storm Golf Classic. With their day shooting on the green, or for some on the rough, the teams of two participated in a best-ball tournament against another duo. Other contests included a hole-in-one event on one of the holes, a closest to the pin event, the longest drive on another and the longest putt on the putting green right behind the clubhouse. Regardless of one’s golfing ability, the participation of over 140 golfers was there to support Simpson athletics and the school’s athletic department.

Bob Nutgrass, compliance coordinator and assistant athletic director, said that it is usually a lot of alumni that support the event, and then they invite someone else to come out and play some golf with them.

“That’s just how it’s grown,” Nutgrass said. “We’ve kind of opened it up and the support we get mostly is from people who have been at Simpson and know the benefits of being at Simpson College.”

The avid supporters of Simpson athletics also got the opportunity to meet some of the Storm athletes. Many of the student-athletes volunteered their day to work the event. Their duties included carrying golfers’ clubs to their assigned golf cart, serving drinks, working the raffle drawing that was in relation to the longest putt contest and ultimately interacting and socializing with all of the golfers.

Senior pitcher for the Storm baseball team Junior Rodriguez was honored to have met all the supporters at the event.

“My day went well. I was given the opportunity to volunteer for my third year at this event and I thought it was great,” Rodriguez said. “I was able to meet alumni that I have connections with, such as through baseball and people from the Chicago area.”

Not only was the golf outing in store for the participants of the event, but also an evening dinner as well as a silent auction was on par for the nightcap. The dinner included a great meal for each person in attendance, and also provided quality, enjoyable entertainment for all of the guests. Numerous companies, businesses and corporations with strong bonds to the Simpson College community made donations for the silent auction. In years past, for example, organizations such as the Iowa Barnstormers have donated signed memorabilia, and there have also been Iowa Hawkeye and Iowa State Cyclone sports packages.

Sponsoring the entire benefit were EliteSports, Jimmy Johns and Sodexo.

Sodexo and Simpson teamed up and started the “Simpson Rally to Stop Hunger.” The program was designed for coaches and their teams to donate goods and household products, ranging from canned food, laundry soap and personal hygiene items. Headed by Assistant Women’s Basketball Coach Elizabeth Curry and Administrative Assistant Judy Hutton, they allowed student-athletes to bring these goods to the equipment room on Sept. 19 and 20. They were also collecting products at the Wayne Carse Benefit one final time before compiling all the numbers and figuring out the totals. One of the players from the winning team will have the chance to win $100. All donations would later be given to the Indianola Helping Hand.

The Wayne Carse Benefit is considered to be one of Simpson’s major fundraisers for the athletic department. It brings in some money for the department and its intercollegiate teams, but that was not the only thing the event provided, especially to Rodriguez.

He was able to walk and talk with John Sirianni, Simpson’s Director of Athletics. Rodriguez felt that it was great that he [Sirianni] would go around and talk to everyone that participated in the event, and also about his involvement with the benefit personally.

“It showed me that we, Simpson College, do care about our alums and our community,” Rodriguez said. “Its not just about the money. It’s about the building progression of a better college and community.”