Men in heels take to field to raise awareness 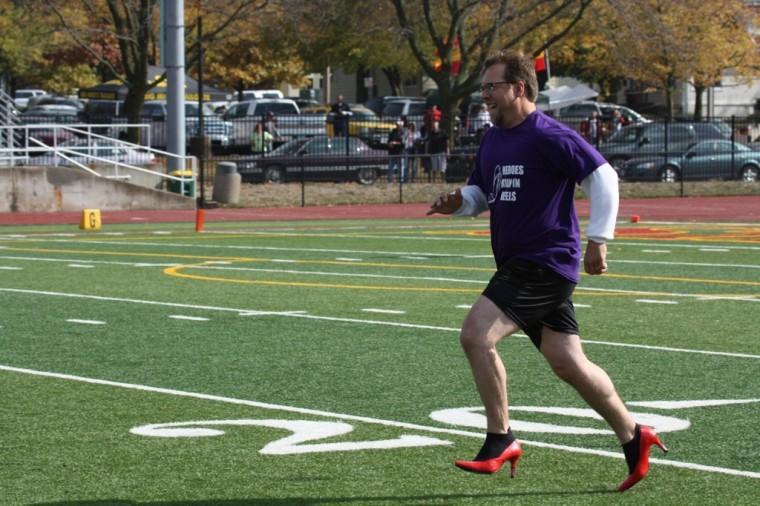 Men running in high heels could be seen at the halftime of Simpson’s football game Saturday, as a part of Sexual Assault Response Advocates’ (SARA) In Her Shoes event.

SARA is a group on-campus that focuses on raising awareness of sexual and domestic abuse and also offers a 24-hour hotline and services to victims of sexual assault.

In Her Shoes involves a team of all males, who run a relay event in high heels across the football field at halftime of a Simpson football game. This is the third year SARA has held the event.

“This is actually a condensed version of an event that takes place all around the nation where men walk a mile in women’s shoes,” junior SARA’s Campus Liaison Allison Barloon said.

The idea behind In Her Shoes is to raise awareness and allow the men of the campus and community to show their support against issues of sexual assault and violence against women.

“It’s a way for men to kind of experience what it is to quote ‘Walk in Her Shoes’ and also for men to stand up and show their presence in the fight to stop sexual violence,” Ellie Olson, SARA adviser and director of counseling services, said.

While the event is held to raise awareness, SARA also uses the event as a way to raise money for the Warren County Domestic Abuse Coalition.

“We set up booths in Pfeiffer and Kent with containers for each team that people can put money in,” Barloon said. “Whatever team raises the most money will receive a head start in the race.”

This year SARA had seven teams of four running in the relay race. Each class had a team, and faculty, SARA and community teams also participated.

This is the first year that a team made up of community members has taken part in the event. It included members of the sheriff and police department and the assistant county attorney.

“SARA has always been trying to reach out to the community around us,” senior SARA member Bobby Dennis said. “Even though we are a Simpson organization, what our real goal is, is to reach the people around us so it’s great that we got people from the community involved.”

When half time of the game rolled around the men of every team marched out onto the field in their red high heel shoes.

Each team lined up on the end zones, except for the junior team who received the head start.

Once the race began, teams scrambled across the field to reach their next teammate. With the head start, one would think the juniors would have the best shot at winning; however, they ended up coming in last.

The champions of In Her Shoes this year were Nick Brummer, Nathan Schneider, Dalton Hayes and Matt Nichols, representing the sophomore class.

Win or lose, each member that participated was glad that they were able to help out with the cause.

“This was a great cause. As much as I’m not looking forward to running in heels, it’s a really good thing to do,” Rich Ramos, assistant dean of students and member of the faculty team, said.

Both members of SARA and those running in the event hope that those attending the game walked away with something.

“I hope they see first off college students having fun, because this is meant to be a fun thing,” Lucas Trainer, member of the junior class team. “I hope they can also walk away with a lesson and maybe put themselves “in her shoes” for a little bit and think about different problems that come up in a woman’s life regarding things with sexual assault.”

Waiting on names of each person that participated…perhaps we could make mention to that somewhere, as it would be nice to know who all raced.