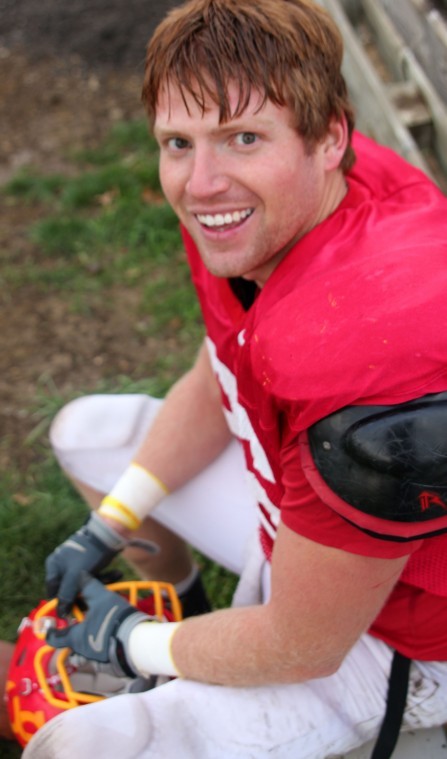 Although he may not have a cane or be in a wheelchair, for Division III standards, Alex McCarty is pretty old.

His teammates call him Grandpa or Coach McCarty.

He has been on the team as long as some of the coaches have.

You may see him walking around campus, or in the weight room, in the library watching film, or on the football field. But whatever you see fifth year senior Alex McCarty doing, he is enjoying every second of it. This is because he is living in, what he refers to as, the glory days.

McCarty is living his fifth year senior life with no worries or stress. Taking only one class, he is able to focus on what he truly loves: football.

McCarty was out his entire junior football season with an injury. At the time he was unsure if he would stay another year after he graduated so he could play an additional year. But since adding another major, he had to stay an extra semester to take a class for it. This made the decision an easy one for McCarty.

“It was a no brainer,” McCarty said. “It sounds corny, but coming back another year to play the sport I love is pretty awesome.”

For most students, college life revolves around homework and studying. Fun events and extra-curricular activities are added to balance it out to make the experience more enjoyable. What McCarty has done is simply remove all of the work and drudgery from college life, which allows him to focus on doing things that he enjoys doing, giving him his glory days.

“I get to work out more, I watch more film, and I don’t have to worry about anything during the week after practice,” McCarty said. “So it is really nice because I get to really just enjoy all of the fun things here at Simpson and I don’t have to deal with any of the things that I consider not fun.”

Here is a typical day for McCarty:

“I wake up by choice at 8 a.m. If I didn’t want to I wouldn’t have to wake up until one. So instead of feeling like a giant turd, I get up early to work out and then watch film in the library. When I am there I sometimes make fun of the people studying and printing off papers for classes, that is one of my favorite past times.

“Every now and then something else crazy gets thrown into my day, never know what can happen.”

The life of a fifth year senior will vary. It depends on the circumstances for why you are staying the additional year. But according to McCarty, his fifth year has consisted of a totally stress free lifestyle.

“It’s a different experience being a fifth year,” McCarty said. “I know that I get to push the real world off for another year which keeps me enjoying my time here. I keep thinking if I wasn’t here, I would be working right now, so I got that going for me.”

The only downfall to McCarty’s lifestyle is that being the only fifth year senior, a lot of the things he does is on his own.

“Being the only fifth year, there is no one really to share my experience with, so that is pretty rough.”

Other than that one downside for McCarty’s fifth year, he is having an awesome time in his final semester.

“Once I got accepted into the younger guys’ cool clicks and groups, it has definitely been worth it coming back, without a doubt.”