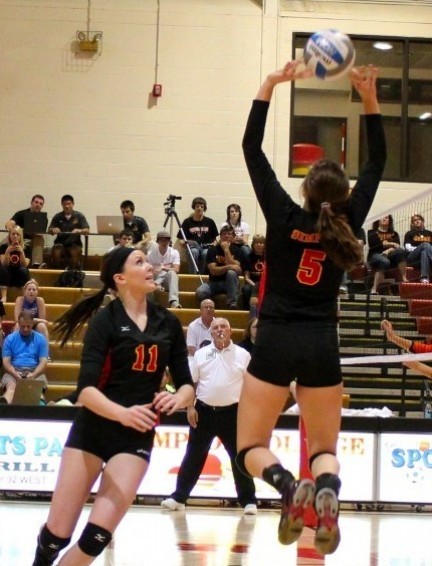 “We just really need to work on our side, work on our errors and make sure that we take care of our side of the net,” Martin said.

Martin provided much spark to the Storm’s killing efforts. The sophomore tallied three spikes, six kills, 15 assists and triggered the third set magic by getting a kill to take the 18-17 lead over the Knights, their only lead throughout the match. Other notables for the Storm is senior McKaylie Croghan, who led the team with 10 kills, freshman Tabitha Blaser, who racked up 17 assists and junior Kim Rogers, who led the team with 12.

Rogers knows that her team is getting better each time they play.

Rogers, as well as the rest of the Storm, are looking forward to the opportunity to play again. The squad will be on the road playing at the Grinnell Triangular at Grinnell College. They will be going up against Knox College at 1 p.m. and then matching up against the host, Grinnell. The Storm took all three sets against the Pioneers when the two squared off against one another at the Simpson Invitational on Sept. 14.