New lighting on campus expected to save money 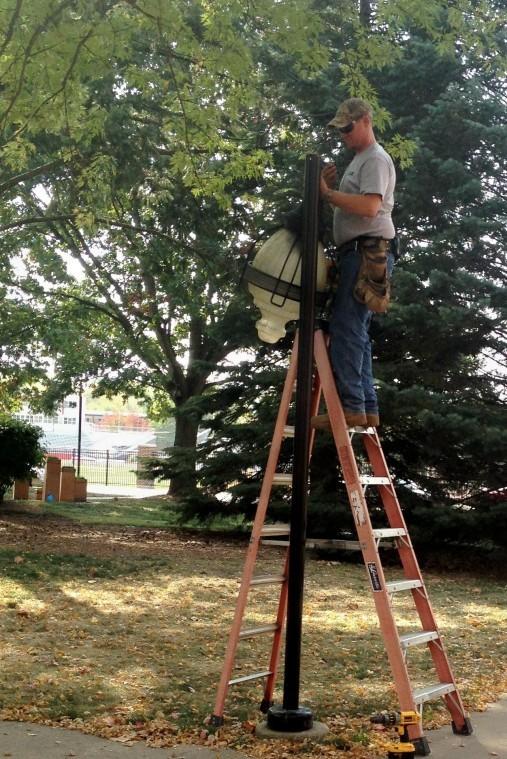 Simpson College welcomes an economically and environmentally friendly new way to bring light to the campus.

Two hundred LED light fixtures will be placed on central campus that will run 365 days a year and 12 hours at night funded by an Iowa Energy Group Grant.

“One of the things Simpson is striving for is a smaller carbon foot print,” Gary Dooley, assistant general manager and maintenance manager, said.

Currently 40 to 50 LED lights are installed on campus at locations, such as: Exterior poles on central campus and lighting up the Simpson College stone signs.

By switching over to LED lights, the college reduces waste, energy and maintenance on the lights.

The average costs to maintain the previous light fixtures cost an average of $500 per year, while the LED fixtures will only cost $800 every few years.

The new LED lights will also reduce maintenance costs, because they last 23,000 hours where as the previous lights only lasted 5,000.

By cutting down maintenance time, we can spend that time elsewhere on the campus, Dooley said.

There are more perks for making the transformation to LED lights, which are: They don’t run as hot as the normal light bulbs which decreases utility costs, a consistent color of lighting and they prevent light pollution.

Light pollution allows light to go up into the air, which becomes wasted light. The new LED lights prevent light pollution from happening by reflectors that shoot light down on the ground.

“We didn’t just jump into this. We have been studying LED lights for a couple years now,” Dooley said.

The project had started last year when putting lights underneath the Blank Performing Arts Center’s bridge and the lights shining on Simpson College’s stone signs.

“Eventually we will want to work on retrofitting the Chapel for LED lights,” Dooley said. “That job itself will be a bit of a process.”

“Another problem with the old lights was that we couldn’t find parts for them,” Dooley said. “We were able to find adapters so we can still use the old poles for the new lights.”

A requirement by the Iowa Utilities Bank, all of the LED lights were American made.

“Not only was it a requirement to have the lights made in America, but it’s the right thing to do,” Dooley said.