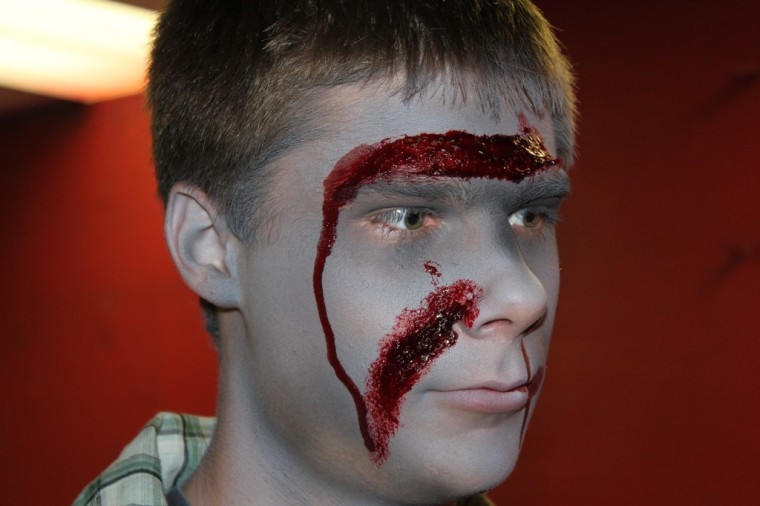 There are monsters, zombies and clowns, oh, my!

The men of Sigma Alpha Epsilon, SAE, volunteered their time to help run The Asylum on Saturday, October 13.

The Asylum is located in Indianola at the Warren County Fairgrounds, 1301 E 2nd Avenue. It is open Thursday through Saturday every weekend in October as well as on Halloween, Sunday, October 31. The Asylum opens at 7:30 p.m. and runs until 11:30 p.m. on Thursday and Midnight on Fridays and Saturdays.

The cost to attend is $10 per person and credit cards are accepted. The proceeds go to support Indianola’s youth by going into the Indianola Community Youth Foundation, ICY.

The ICY was started when Major League Baseball player Casey Blake donated $1 million dollars to the Indianola schools. The donation is a dollar-for-dollar matching gift program, challenging the students and members of the community to raise $1 million on their own.

The current usage of the money raised will be used to better the athletics, but is not the only goal.

Be prepared to walk through narrow hallways, crawl through tunnels, slide down slides and wade your way through a ball pit, all of course, while avoiding the creatures of the night jumping out whenever least expected.

Sophomore Dylan DeJong played a zombie and emerged out of a dark corner scaring people passing through a narrow hallway.

“I got my face painted and they put fake blood on me,” DeJong said.

People from the community volunteer each night and fulfill the many roles required in the haunted house. Among these people are organizations such as SAE, and the Indianola Dance Team as well as young children and adults.

“The best part would have to be seeing their reaction when Nick Reinert started up the chainsaw and chased them out of the building,”DeJong said.

Food vendors are also at the event, selling food that is commonly found at fairs.

The Asylum is not recommended for children under the age of 12.

“A group of six middle school students were in line before us and chickened out at the last second,” Junior Nicole Overbergen said.