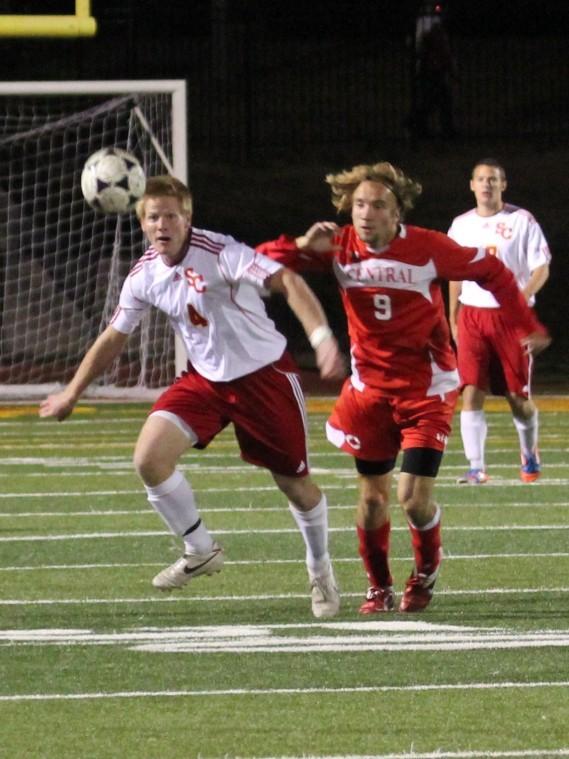 The men’s soccer team saw what the football team did to Central on Saturday, and took it to the pitch as part of a convincing 5-0 win over the Dutch.

The Storm, who currently stand 8-5-1 overall, were looking to bounce back from a loss after dominating all prior opponents in the previous weeks. This would be a challenging task though as they would have to go against Central, who always plays Simpson well no matter what the sport. Central currently sits at 4-8-1 overall.

Right out of the gates the Storm looked outstanding and took it right to the Dutch. The play of the midfielders and forwards was very strong tonight where Simpson out shot Central 23 shots to 9. The Storm was relentless on offense and just kept attacking the Dutch, who clearly had no answers for the Storm.

The Storm received contributions from many different guys. A major contributor on the offense tonight was senior forward Mark Lahart, who was a tough matchup for any Dutch that he was up against tonight.

“I think we played really well, I mean Central is a quality team and we put five goals on them so that is something to be proud of,” Lahart said.

The Storm was also led by senior forward Jeremy Reinert, who seemed to always be in the thick of things during the game and has been a force for the Storm all season. Reinert believes that the team has come a long ways since the start of the season and can still do more.

“We showed growth since the beginning of the season where we dropped a couple of 2-0 leads,” Reinert said. “It looks like we are headed towards the right direction and come conference time we will start to peak and be a pretty tough team to deal with.”

While there is still time to make improvements the team seems to be headed the direction that they want to be.

The Storm are in action again on Saturday, where they will be facing Luther College. That game will be underway at 3 p.m.