Team looks to finish season with a bang 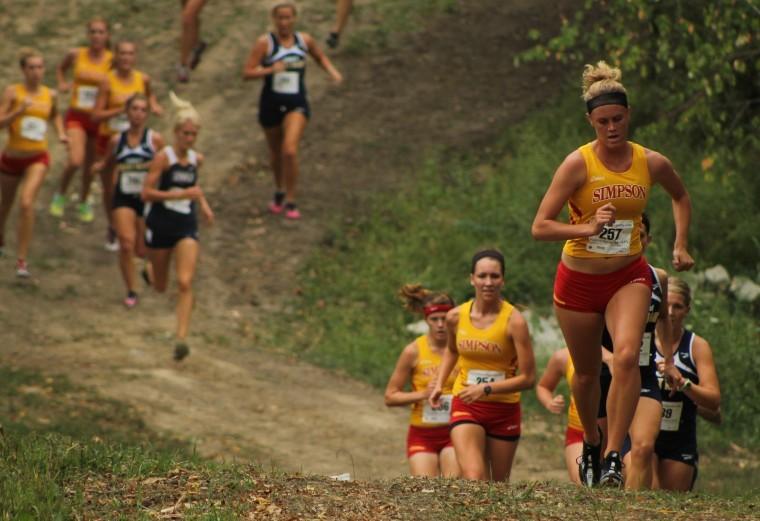 After placing fifth and sixth at the Iowa Conference Cross Country Championships in Cedar Rapids Oct. 27, the Simpson College men and women’s cross country teams are looking to stride it out even more at the Central Region Championships next weekend.

“I was pleased with our performance Saturday,” Moenck said in regards to the women’s performance. “It was an improvement from last year, and that’s what we need to be focused on.”

As for the Storm men, Moenck knows fifth place is still not where the team wants to be.

“Placing fifth in the conference this year was a nice improvement from the previous year. While improvement was made by our program, fifth is still not where we want to be,” Moenck said.

The men’s team recorded its best performance at the conference meet since 2008 with their team’s fifth place mark. Junior Joe Farrand crossed the finishing line with a time of 25:44.1, placing fifth overall at the event.

Moenck believes that Farrand has filled the void left by two-time national qualifier Ryan Edwardson, who graduated from Simpson last year, which was one of Moenck’s concerns coming into the season.

“Joe’s performance was big for us. In order to have team success you need that low point-scorer,” Moenck said. “Joe has done a tremendous job of filling the role of our number one man.”

Finishing just behind regionally ranked Wartburg College by five points, Saturday proved to the group that they are fully capable of running with the top teams in the conference. Their goal is to finish in the top 10 at regionals, making it a tribute to the three seniors, Mitch Davis, Jake Sutton and John Warnke, for the impact each and every one of them made on the program.

“As freshmen they were 18th, sophomores 15th, and last year 11th,” Moenck said. “Each year they have been on teams that have made significant improvements at the regional meet. If we can run up to our capabilities at regionals, it would be a great way to close out our season by making it four for four years. They each have been tremendous leaders on and off the course.”

As for the women’s team, five of their top seven finishers were underclassmen. Coming into the year, Moneck was very excited to see how they would perform with the expectations given for them.

“So far they have done a nice job of executing the race plan and running to their capabilities,” Moenck said.

Junior Lindsey Borgomainerio led the Storm pack by recording a time of 24:38.6 at the conference meet, good for 36th place.

Their goal is to finish in the top 20 at the meet.

“It will take our absolute best to reach this goal,” Moenck said.

Both squads will travel to Northfield, Minn. for the Central Region Championships next Saturday, Nov. 10.