A trip down the rabbit hole 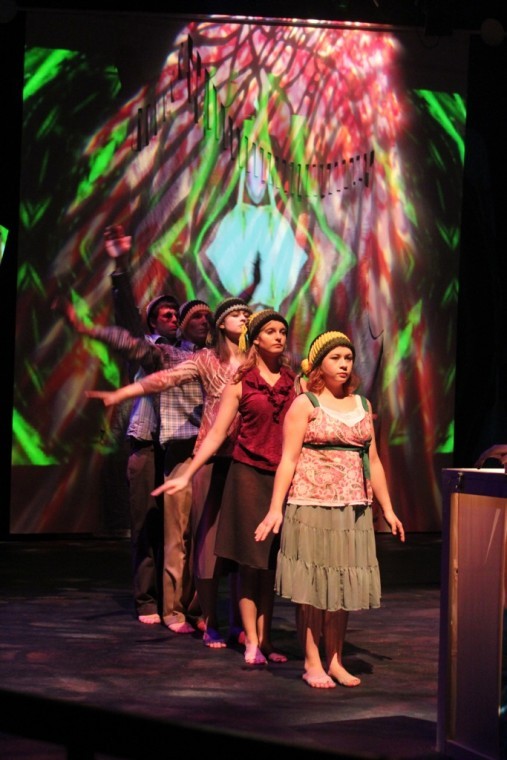 The performance was conceived and directed by Simpson’s Professor of Theater Art Jennifer Nostrala, and is very unique in a number of ways. One of these ways is the way the story is conveyed to the audience.

“It may be difficult to label the experience you will have today,” Nostrala said in her Director’s Note in the program for the show. “There are characters, dialogue and conflict, but it isn’t a play. There is music, movement and dance, but it isn’t a dance concert.”

The production was much more focused on movement and dance than other pieces from Theatre Simpson.

“This is more of a movement-based piece, so there’s a lot more dance involved and that’s happened in a couple of shows but nothing quite to this extent,” junior Jenny Wilkerson said.

This was difficult for some cast members to adjust to, having no previous experience with dance.

“With the movement pieces, some of us don’t have any dance training or experience so we weren’t up to level with some of the other cast members, so that took some getting used to,” Wilkerson said. “It’s a lot of work. It’s really fun, but it’s a lot of work.”

That wasn’t the only source of difficulty the cast members ran into, though.

The show combines all of these movement and technical elements as well as the story from Carroll’s two books into a new portrayal of the story.

All of the main characters in the stories made an appearance: the White Rabbit, the Mad Hatter and the March Hare, the Caterpillar, known as Absolem in the Tim Burton movie adaptation, Tweedledee and Tweedledum, the Red and White Queens and of course the Cheshire Cat.

The production utilized simple lighting and shadows, video on the background screens, music, dance and words to tell Alice’s story as she travels through Wonderland, trying to figure out who she is and whether any of it is real, including herself.

“The journey for this production began over a year ago,” Nostrala said. “I was interested in exploring a more abstract theatre piece that was less focused on narrative and emphasized movement, video, puppetry, and other theatrical elements.”

The cast hopes to use this piece in various other settings because of the work and the time that was put into it.

The production’s goal was to portray the same feeling of Carroll’s books and Alice’s quest to find who she is and the confusion she felt in doing so.