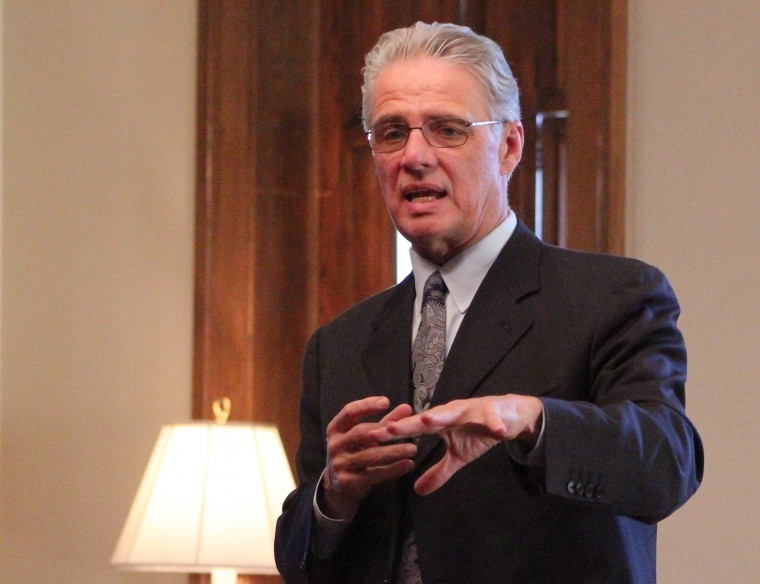 At the very beginning of his open forum, presidential finalist Kent Trachte outlined three challenges that he says Simpson and schools like it will face in the future.

Trachte, currently the dean of the college at Franklin & Marshall College in Lancaster, Pa., told faculty, staff and students that the list of challenges facing all liberal arts colleges first includes persuading potential students and families that the education is worth the high cost.

Other significant issues include dealing with a failing budget model and changes in demographics among college students, he said.

The last of the three finalists to visit campus, Trachte held his open forum on Monday afternoon.

When talking about budgeting, Trachte specifically called out tuition raises. Relying on such raises to generate revenue was used extensively by colleges until around 2008 and simply won’t work any longer, he said.

“Those budget models were based upon an ability to aggressively increase tuition,” he said. “Every other small liberal arts college was doing it and it was a way for us to generate revenue.”

Further, for Simpson to thrive into the future, Trachte said, it must respond to various demographic changes affecting colleges. A top concern is that the number of college-bound young people is not growing in Iowa and the Midwest – the traditional base for Simpson – like it is in other parts of the country.

“The college-going population is not growing in these parts of the country,” he said. “One of the challenges for us is how do we, Simpson College in the middle of Iowa, establish a presence where those growing populations exist.”

Another opportunity the school needs to take advantage of is a growing number of up-and-coming high school students in urban areas, who now have the opportunity and are ready to attend a four-year college because of urban education reform efforts.

Many of these youth will be first-generation college students, and it’s a rapidly growing demographic, Trachte said.

These are challenges and opportunities that Trachte said he would be prepared to deal with as Simpson’s president.

One tactic that Trachte says has been successful in recruiting diverse students at Franklin & Marshall is to increase the college’s use of “access groups” that help colleges find students to recruit from schools and other community organizations.

Helping the college serve these first-generation students from urban centers could also prove to be an area where the college could collaborate further with the United Methodist Church, Trachte said.

“What I was talking about previously in terms of providing education to young people that will transform lives, transform families, transform trajectories and help people be able to lift themselves out of poverty, I think is very consistent,” he said. “I think the church could also bring some resources to bear with this particular idea.”

When asked about his style of leadership, Trachte said he believes in working collaboratively, but also has the ability to focus on multiple areas and issues.

He expects that Simpson will need to undergo strategic planning in the near future, he said, and would work to include input from the entire campus community.