Opera star and NCAA cross country championship qualifier; Farrand does it all 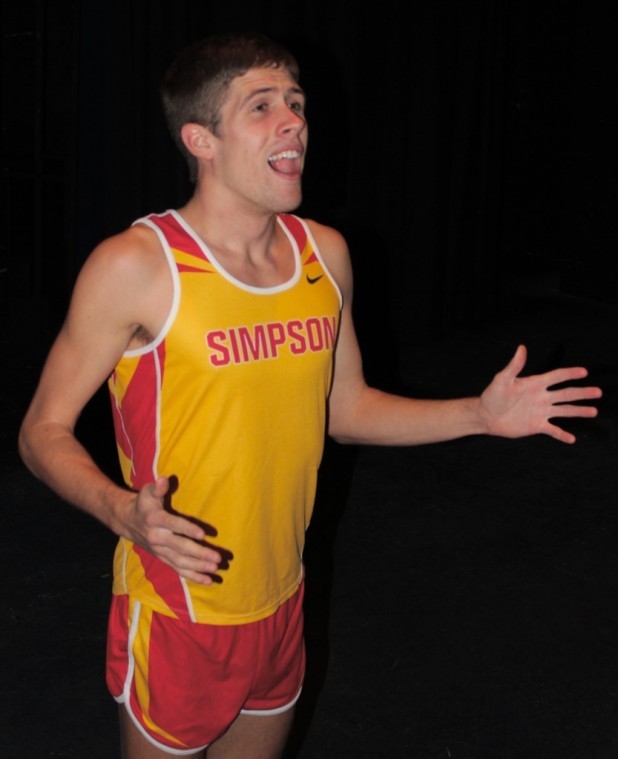 A day after The Beggar’s Opera ended, junior Joe Farrand, who played the leading role as Captain Macheath, qualified for the NCAA Cross Country Championships.

“I was very surprised,” Farrand said. “It had been a very busy weekend, and on paper it looked like I could qualify, but actually going out and doing it was another story.”

Farrand plans on getting a large amount of rest and take a down week to enjoy the process prior to the NCAA Championships. Farrand says that he plans to not get too excited and treat this meet like any other meet by simply enjoying it.

Farrand admits that we don’t have one of the best regions in the country in terms of times; however, he says it’s reasonable to finish within the top 120 competitors.

Heath Moenck, head cross country coach, says to qualify for the NCAA Championships is an incredible achievement, every runner wants to finish their season at a national meet, and Farrand has earned that right.

This is his second season running for Simpson’s cross country team, having taken a season off previously.

“Joe’s intrinsic motivation to be the best is unmatched by any athlete I’ve coached in my five years,” Moenck said. “Joe is an incredibly motivated student-athlete. His success as an athlete doesn’t match how gifted of a student he is.”

Not only has Farrand achieved the honor of participating in the NCAA Championships, but he also starred in his first Opera as the lead role.

“I was going to study music here anyway, but it really kind of grew on me,” Farrand said. “My friends are singers so just being around them and going to their shows really got me in the performing at Simpson.”

Macheath, the role Farrand played, can be described as a notorious highwayman much loved by the ladies, a sort of Robin Hood meets James Bond, Bernard McDonald, assistant professor of music, Larsen chair of opera and director of The Beggar’s Opera, said.

McDonald describes Farrand as an earnest, intelligent and self-disciplined person who demands highly of himself.

“He appreciates similar qualities, these are the traits that will stand him in good stead as an educator or in whatever professional field he enters,” McDonald said. “His personal and artistic contribution to the show was hugely appreciated by his colleagues and the audience.”

But what motivates Farrand into giving it his all whether he is on the course or on the stage? It’s quite simple really, determination.

“What really motivates me is working harder than other people, being able to prove myself and prove to myself that I can take in a lot and get it all done,” Farrand said.

He gives advice to anyone who wants to know his secret to success:

“I was very lucky to have a great support group of friends, family, coaches and professors, without them nothing would be possible,” Farrand said.