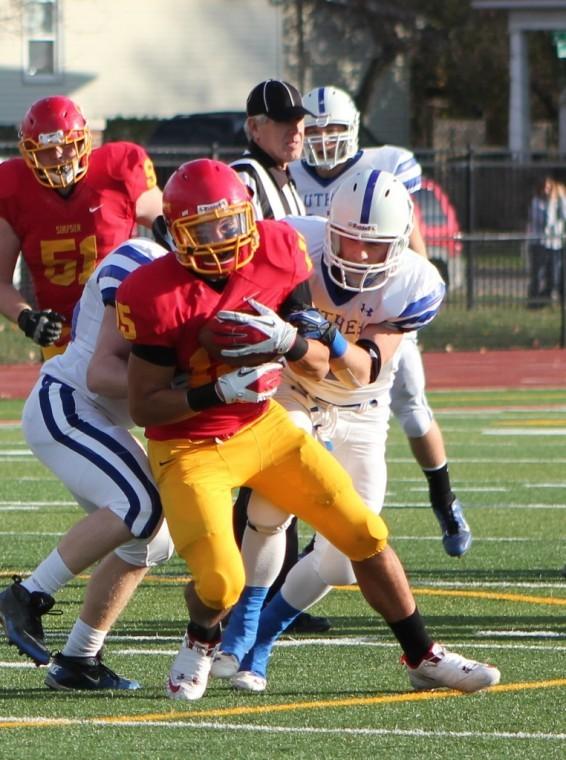 There is no better way to end the season thanks to the beautiful weather, Senior Recognition Day, and The Storm football team being matched up against the winless Norse of Dubuque.

While this game appeared on paper to be an easy victory for the Storm, the Norse were going to give everything they had in this game to make sure they did not have a defeated season.

Right out of the gates the Storm looked very relaxed and focused on the task at hands. They put together a nice quick drive to start the game that quickly put them up by a touchdown. Unfortunately, this trend did not last long. Several costly turnovers by the Storm let Luther back into the game. Luckily for the Storm, the defense was hungry today and did not give hardly anything up to Luther.

Going into halftime the score was 14-10 in the hands of the Storm, but no team really had an edge in the first half. At the time the game seemed like whichever team got some momentum was going to come away with the win.

On a crucial fourth down late in the second half of the game, Nelson found a whole on a Quarterback draw and ran the ball in for a touchdown from near mid field. This happened to be the decisive blow that the Storm were looking for.

The Norse had nothing left in the tank and could not find a way to put a solid drive together in the second half.

It was a battle the entire game, but the Storm kept grinding and ended up to be too much for the Norse as they won 21-10 as the final score.

Junior Taylor Nelson, who played a main role in today’s game, was satisfied with how him team competed the entire game.

“We played a hard football game. We started out really hot and connected on a few passes to score right away. They ended up switching their defense up which got us caught in a little rut, but we happened to dig our way out of it and kept fighting.”

For the seniors it was an emotional day but they could not have been happier with the outcome of the game. Senior Billy Weathers, a prime wide receiver in his tenure at Simpson, was pleased to see his team come away with the win.

“I am glad we ended on a good note and ended with a winning season. We would always like to keep playing, have a conference title and leave something behind, but I know we left our mark,” Weathers said.

The Storm started out the season on a roll and slowly fell off of the radar in the Conference, but they were able to grab a big win today. While all of the seniors will be missed and Simpson is grateful for what they contributed to this up and coming program, the offseason is now upon them where the players will look to get bigger, faster, and stronger so that next year’s season cane be as successful, if not more successful than this year.