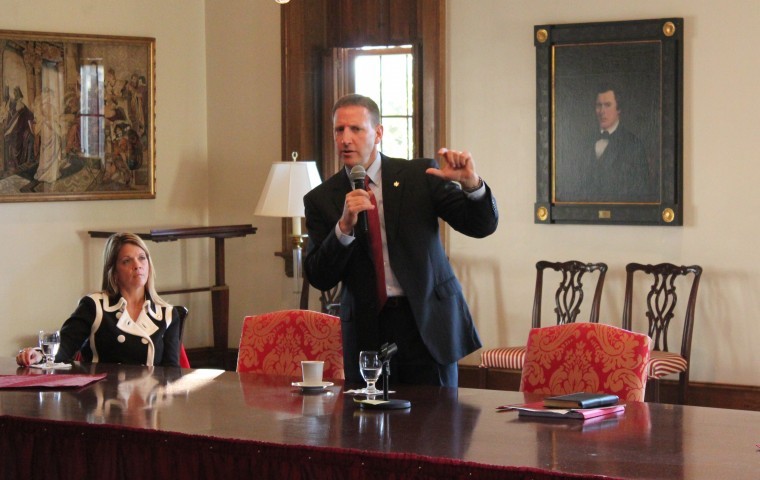 Transparency, collecting information and student and faculty diversity, were all talked about by Simpson College presidential candidate Jim Troha during his open forum on Thursday.

Troha is currently vice president of institutional advancement and university relations and served as interim president at Heidelberg University in Tiffan, Oh., and is one of three presidential candidates for the college.

The first question directed at Troha was his style of administration and how he could relate to faculty and staff.

“I believe that I have been about collaboration, teamwork, transparency and visibility as an administrator,” said Troha. “I don’t believe that we can be successful as a community without having some clear objectives of community and we all have to have some say in that.”

Troha said that if he were chosen as president that he would be visible to the college.

“I have always set aside time on my calendar to get out of the office and go outside and see my colleagues, faculty, staff and students,” said Troha. “Instead of sending an email or picking up with phone to call somebody, I get out of the chair and walk over to their office to talk to them or ask a question.”

As interim president at Heidelberg University, Troha tried to build transparency with staff and faculty by sending reports about the state of the college and what was going on within the institution after board of trustee meetings.

In an interview with The Simpsonian, Troha again stressed the importance of communication and transparency within the school.

“As a president, there will be news that I share that won’t be all that positive, but I hope people appreciate having that news, versus learning it through some other avenue,” said Troha. “That’s how you gain respect and I think that’s how you gain trust, that you have that communication open with faculty, staff and students.”

Marilyn Mueller, professor of management, asked about Troha’s experience and commitment to assessment and institutional research.

“I’ve been an advocate of this day one, because as an educator I need to know what is happening in our community that is making a difference or not,” said Troha.

Troha said the only way to know if you are producing what you say you are as a college is to have institutional research. Simpson currently does not have a position or office dedicated to research, but with the college’s accreditation review coming in 2014, Troha said figuring out a way to collect important data would be a priority.

“The environment is so competitive right now and every decision is important that you make,” said Troha in an interview. “The only way that you are going to make really good sound decisions is to have information and to have the right information and you can’t get that information without good data or research.

At the past two institutions Troha has worked at, Baker University in Kansas and Heidelberg, had positions within the college that were in charge of just institutional research.

Along with transparency and research, Troha spoke about building diversity among students and the possibility of building the school’s study abroad program.

Troha has held numerous positions in the field of higher education. From 1993 to 1995, Troha an area coordinator for Greek housing and men’s golf coach at University of Evansville in Indian. In 1995 accepted the position of Dean of Students at Harlaxton College in England, which is the British campus of the University of Evansville.

Troha also held the position of Dean of Students at Baker University in Kansas from 1997 to 2001.

In 2002, Troha began his work at Heidelberg University in Tiffan, Ohio, where he is currently employed as Vice President for Institutional Advancement and University Relations. While at Heidelberg, Troha held position of Interim President from 2008 to 2009.

As interim president, Troha managed a $90 million dollar budget, helped orchestrate a refinancing of 17 million dollars in state-issued bonds, and led in Heidelberg’s transition from college to university.

The final presidential candidate, Kent Trachte will be that last candidate to visit Simpson on Monday, Nov. 12.