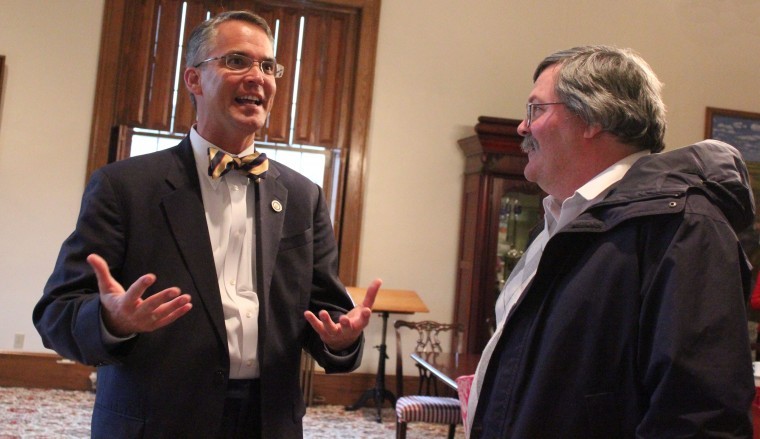 One of the first jobs for a new Simpson College president should be to look at how the college uses its money, said one candidate up for the job.

David Bushman, dean of the school of natural science and mathematics at Mount St. Mary’s University in Emmitsburg, Md., was the first of three presidential finalists to visit Simpson.

He met with faculty, staff and students in an open forum in the Matthew Simpson room in College Hall on Monday afternoon.

In response to a question from Professor of Art David Richmond about what the first priorities should be for a new president, Bushman readily admitted he didn’t know much information about Simpson’s budget or personnel.

But evaluating both would be an important first task, Bushman said.

“That would be one of the very first things to look at,” he said. “How are we supporting what we currently do, and that’s both programatic and personnel. In what ways are we investing resources and how does that balance work?”

Through the forum, Bushman highlighted his views and answered questions on other topics including fundraising and how Simpson can compete with similar schools into the future.

One of his main beliefs as a fundraiser, Bushman said, is that all gifts are important and that its up to the university to help all donors find a way to offer support.

“It’s never about the institution’s needs,” he said. “It’s about donor’s needs.”

Another key, he said, is moving fundraising beyond alumni and into the local business community.

While there’s been much focus nationally on future challenges for four-year liberal arts colleges, Bushman said he believes the future remains bright. Simpson’s alumni are connected, he said, and the faculty and program at the school are known for their quality.

“If you had to check off what predicts success…those are what you look at,” he said. “That’s actually a platform for which a presidential transition can really help an institution. It’s kind of an infusion of new energy.”

In an interview with The Simpsonian, Bushman said he believes the college is also in a good position financially relative to other similar schools around the country. A new president mixed with newfound budget strength could help to bring new momentum to the college, he said.

“Simpson has come through much stronger,” he said. “It doesn’t mean everything is perfect, but it does mean we can contemplate this presidential transition and contemplate the direction without being fearful.”

Bushman received a biology degree from Maryland’s Loyola College in 1985, and eventually earned his masters and Ph.D. in entomology at the University of Maryland, according to a resume provided by Simpson College to students.

After getting his doctorate, he worked as a biologist for a chemical company in New Jersey.

He previously served as a college president form 2005 to 2009 at Lees-McRae College in North Carolina. Leaving the college in 2009, he returned to Mount St. Mary’s where he took had previously worked as biology professor, department chair and dean of academic services.

Bushman is the only candidate in Simpson’s presidential search who has previously been a full-time college president. However, Jim Troha, who will visit Simpson with his wife on Thursday, was an interim president at Heidelberg University in Ohio for one year.

The last presidential candidate to visit Simpson will be Kent Trachte, whose forum will be on Monday, Nov. 8.

Visit www.thesimpsonian.com tomorrow for more from the forum with Bushman and more insights into the presidential finalist.