Making winning a priority, not an option 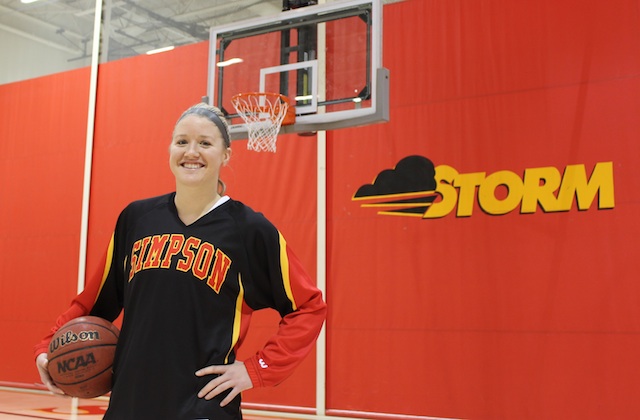 Averaging almost 22 points, grabbing about 10 rebounds a game and being a constant, unanimous pick as IIAC Athlete and Player of the Week, Simpson women’s basketball player Kate Nielsen sure is making the most of her senior year.

It is hard to believe her collegiate athletics career did not start with a basketball.

Being an elite first team all-state performer in a different sport, Nielsen had decided on continuing her soccer career at Minnesota State University, Mankato after graduating at Johnson High School. When basketball season came around, however, Nielsen really excelled on the court. She was a first team all-conference and third team all-state pick and was also selected to Iowa Girl’s Coaches Association Gatorade All-Star game.

It was then when Nielsen knew how much she loved basketball.

“I had already made up my mind that I was going to play soccer in college since that was probably my best sport in high school,” Nielsen said. “I enjoyed my first year at Minnesota State playing soccer but basketball was always in the back of my mind. I wanted to play more basketball and Simpson was my first choice for that.”

Nielsen had two cousins attend Simpson and one of them had played basketball under head women’s basketball coach Brian Niemuth.

“I always had different connections with people at Simpson, so when he recruited me for basketball out of high school, I was excited,” Nielsen said. “After talking to some girls on the team and coming in contact wit Coach Niemuth again my freshman year [of college], I decided that I wanted to go to Simpson and play basketball.”

As soon as she committed to Simpson and was accepted into the school, Nielsen quickly started training as a basketball player. She continued to do more strength and conditioning workouts along with shooting and ball handling drills.

Every year she says she gets more comfortable as a player.

“I continued to get stronger in the off-season as well as develop basketball skills,” Nielsen said. “I used the off-seasons to get better in areas that needed improvement and worked hard in the weight room. I think that’s why every year I keep getting a little bit better.”

Nielsen’s growth as a player really has shown on the court, dating back to her first season after transferring as a sophomore. As a bench player, she averaged almost 8 points and 6 rebounds in all 29 games her sophomore year.

Then as a junior, her game really started to click. Nielsen received first team all-conference honors for the Storm, averaging 13.6 points and 7.6 boards.

Now in her final season wearing the Simpson red and gold, she continues to dominate on the hardwood just as before. She has been named Conference Player of the Week six times this season, Conference Athlete of the Week fives times this season and has just recently reached the 1,000 career points scored mark on Jan. 26 as Simpson defeated Coe 70-62.

“I feel very honored to have reached 1,000 points in my career here at Simpson,” Nielsen said. “I wouldn’t have been able to accomplish that without my teammates and coaches. Without them, I would not be the player that I am.”

With Nielsen a part of the team, Simpson has been IIAC Champions or have had a share of the title, and have been a constant selection in the NCAA Tournament. As of Jan. 30, 2013, the Storm are 61-15 overall, 35-5 in conference play during Nielsen’s career.

After the first game this season, Nielsen knew in her mind that this team was something special.

Simpson is currently ranked No. 10 in the nation, according to D3Hoops.com. Holding an overall record of 18-1 and a perfect 7-0 in the IIAC, Nielsen and the Storm are looking to continue their winning ways.

Nielsen said that the seniors made it a top priority at the beginning of the season to get to know the incoming freshmen players from not only a basketball perspective, but a personal perspective as well.

“We really wanted to learn about them and because of that we have developed such close relationships. I would definitely call our team a family,” Nielsen said.

She also believes that the younger players are going to do great things during their careers here at Simpson.

“They are a really talented and hardworking group of girls,” Nielsen said. “Every year they will continue to grow as players. They have stepped into their respective roles and have done everything that has been asked of them. I see them having a lot of success in the future.”

When trying to describe the team in one word, two words came to mind: determined and competitive.

She isn’t a very superstitious player, but there is one thing Nielsen might worry about.

“I would get a little nervous if Coach [Niemuth] stopped wearing his black cardigan, which he is superstitious about,” said Nielsen.

Nielsen leaves current and future athletes of Simpson college with these words of advice:

“Just do the best you can in athletics and academics. Everything is so much more rewarding when you give 100 percent and know you have done everything possible to be the best you can be. Also, remember to have fun in whatever you do because time flies and four years will have gone by before you know it.”