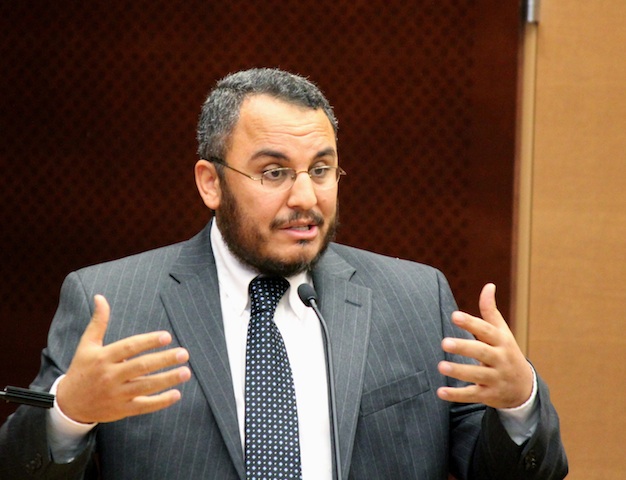 In his visit to Simpson, Imam Ossama Bahloul, gave insight to students faculty and staff about how the Islamic and non-Islamic communities in America need to drop stereotypes and accusations about each other to allow us to co-exist together in communities.Bahloul is the Imam, of the Islamic Center of Murfeesboro, Tnn., which led to much controversy over the construction of it, leading to protests, vandalism, arson and bomb threats, back in 2010. While this was an important event, Bahloul spoke very little about it in the forum event.“It seems like so many people are interested today in talking about different religions, Islam in particular, especially with what happened on September 11th and what’s going on today in the Middle East, and it concerns so many people,” said Baholoul. “It seems like the Muslim community, as well as the non-Muslim community are raising concern. Muslim’s are worried. It seems like people are still stereotyping ups and assume that we are bad.”While there are stereotypes from the non-Muslim community, Bahloul also commented on how the Muslim community has stereotypes as well. To show this, he gave an anecdote about his mother. Upon coming to America, Bahloul married a woman from Dallas, something his mother did not approve of due to her belief that Americans hated people from the Middle East. However after Bahloul and his wife visited his mother in Egypt, she then realized her stereotypes of Americans were false. “What happened with my mom, she had her idea about America, and she had been forced to interact with an American,” said Bahloul.“I feel if we were to allow ourselves to have an opportunity to really get to know each other, we will be able to get rid of the stereotype. It’s dangerous because people in America stereotype people in the Middle East and the Middle East stereotype people in America.”Bahloul went on to speak about how you cannot stereotype an entire community because of the acts of an individual, in regards to September 11th. For this he used the Catholic Church as an example, saying just because there have been incidents of sexual abuse in the Catholic church doesn’t make all Catholics terrible people.“My point is, if we are going to allow ourselves to stereotype an entire community because of the acts of an individual, we are going to destroy our reputation as human beings.”Bahloul commented that much of the anti-minority movement in America, that movement is very minority itself, but they might have a vocal voice. Bahloul went on to say that the majority of people are fine, but not all of them speak their mind in favor of what’s right.“While we have some minority being tied together to attack another minority, I think we must stop that,” said Bahloul.In concluding, Bahloul said that we as people have to put aside our ideas and stereotypes of religion and work together to better our community.“You can go to your church, your synagogue, your mosque, you can go anywhere or nowhere at all, but while you are doing this, please realize that we can agree, can work together to resolve so many conflicts and can overcome so many challenges facing us as a nation.”