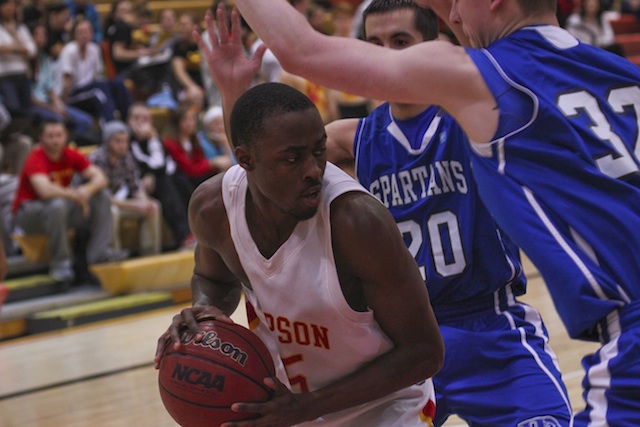 After an emotionally filled and excitement driven season, the Simpson Men’s Basketball finally end their season at Dubuque falling to the Spartans 71-63.

Following a crucial and significant win over archrival Central last Saturday, Feb. 16, the Storm had sealed the final spot in the IIAC tournament.

Finishing with the last spot meant they would be road tested throughout the entire tournaments, with no home court advantage.

The Storm struggled in the first half shooting 32 percent, and the starts combining for only 11 points. AJ Arrington lead all scorers at half with eight points, but it wasn’t enough to overcome the shooting of the Spartans as they trailed 33-25 at half.

The Spartans controlled the tempo of the game from the start. They were able to shoot almost 48 percent from behind the arc. Simpson only shot 20 percent on (3-15) shooting.

Frazier, the Spartans leading scorer for the season, was able to have another hot night scoring 15. Arrington lead all scorers with 16 off the Simpson bench, but wasn’t enough to spark the team to a victory. Senior Elijah Knox finished his career third all-time assist leader and scored 12 points Tuesday, one rebound shy of a double-double.

Simpson was winless against the Spartans this year going 0-3.

As a rough season comes to an end for the Storm, Dubuque will prepare to take down the Buena Vista Beavers on Thursday night in Storm Lake to wrap up the semi-finals of the IIAC Tournament.