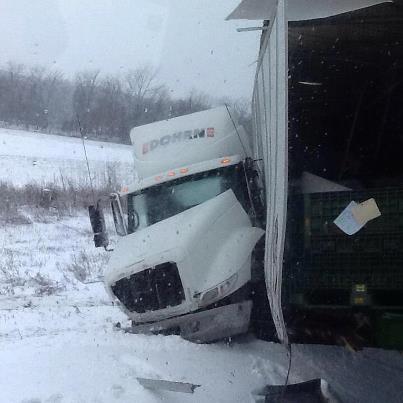 Only minor injuries were reported in a morning accident involving a semi truck and a charter bus carrying the Simpson softball team to a tournament in Michigan.

The accident happened around 8:15 when a westbound semi on Interstate 80 lost control and crossed the median near Colfax, according to Jessica Lown, public information officer for the Iowa Department of Public Safety.

The semi jack-knifed and the bus carrying the softball team ran into it, Lown said. The accident caused additional crashes in the eastbound lane of I-80, but the road reopened around 11:30.

Simpson freshman Kaye Taylor, who was on the bus at the time, said everybody was in shock following the accident.

“When we crashed into the bus, everything went into slow motion,” she said. “We had some people screaming, people were holding onto each other.”

More details will be posted as they become available.