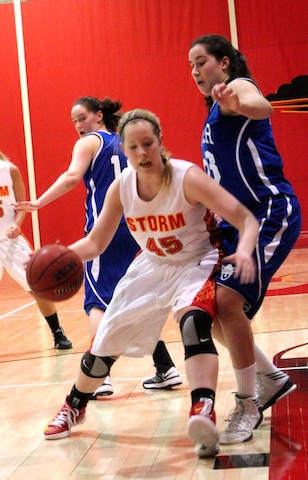 The Simpson College Women’s Basketball team was facing off against Luther for the second time this season Saturday afternoon, looking to sweep them in the regular season and improve to 10-0 in conference with a 85-76 win.

The Norse started off the game quickly outscoring the Storm 8-2, until Simpson decided to come alive after the first few minutes. Once Simpson caught back up with Luther, the game stayed neck and neck all the way up to halftime due to the hot scoring from both teams. Luther shot 50% from the field in the first half while Simpson was right behind, shooting 44%. Both teams were also perfect from the line. The Storm had the slight advantage though as they went into the locker room with a slight lead over Luther, 42-38.

Simpson continued their hot shooting as they came out of the locker room giving themselves a slightly larger lead than they had, but Luther was still hanging around. The Storm came away with another big win thanks to some clutch shooting.

Senior Kate Nielsen, who scored 29 points, knew that it would be a close game, but as long as the team played with intensity they would be fine.

As the season winds down the Strom still believe they have some areas to cleanup before conference time.

Senior Kelsie Reeves said, “Rebounding is always something that we can improve on and will be crucial come tournament time.”

The Storm will be in action again Wednesday as they will take on Wartburg. Tip off will be at 6 p.m.