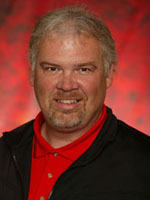 DUBUQUE – In Brian Niemuth’s mind, his 500th win wasn’t a pretty one, but one that will ink the Division III record books.

“It is all because of the young women who have come here and have been able to play basketball,” said the head women’s basketball coach. “I’ve been blessed to be around such wonderful young ladies over the years.”

The Storm women continued their unblemished IIAC season with a 75-62 win over the Loras Duhawks.

Even though Niemuth became the 20th coach in Division III history on Saturday, he still remains humble.

“I’ve never gotten a single rebound or point for this team,” said Niemuth. “It’s been the players who have won these games.”

Simpson didn’t make their 22nd win an easy one, however.

“There wasn’t really a flow to that game,” said Niemuth. “It certainly wasn’t one of the best we’ve played, but still one we we’ll take.”

Simpson turned the ball over 16 times, eight per half, but including three in a two-minute stretch in the second half.

The Storm came into Saturday’s game as one of the best teams in the nation when it comes to free throws. There are times when a team just has an off-game, and Saturday served as that from the free throw line for the Storm.

Simpson shot 11 of 19 from the line, which Niemuth admitted it was uncanny for his squad.

“We could have shot better,” said Niemuth. “It was just part of just playing the way we did today.”

However, there were some good things that came out of the historical win.

One of those included limiting Melissa Herrmann to not using her length. She had just one block against the Storm on Jan. 16, but did not have one on Saturday.

“We didn’t want her to be a factor, but Kate (Nielsen) and Brooke (Panzer) did well going against her,” said Niemuth.

The senior and freshman forward-center-duo was indeed a factor in the team’s second-to-last road game. Nielsen had 21 points; Panzer scored 14.

The history of Niemuth’s win is very impressive.

In his first 11 seasons, Niemuth failed to win an Iowa Conference title. He averaged 12 wins a season. He points out that it was his fourth season that helped turned things around.

Meanwhile, Niemuth’s career record in his 26-year stint with Simpson is 500-194. While his first 11 seasons weren’t as successful, the others have been valiant. In the last 15 seasons, Simpson has won a minimum of 19 games, and in 13 of those, they’ve won 20 or more.

Simpson has their senior day on Wednesday against Dubuque, and Niemuth has one goal in mind for their 6 p.m. tip-off.