With STDs on the rise, safe sex is a must 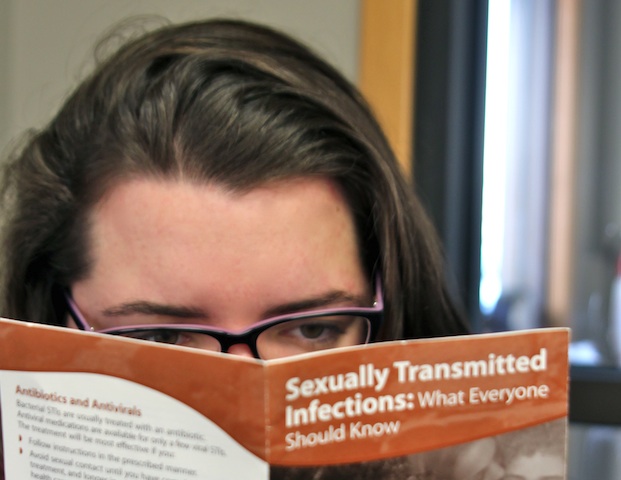 On Wednesday, Rita Audlehelm, Simpson College’s director of health services, spent two hours in the Kent Campus Center to talk to students about sexual health.Audlehelm held the event to talk to students for the college’s sexual responsibility week, but data from the Iowa Department of Public Health shows that it might be the right time to have the conversation. Though official numbers will be finalized in March, preliminary data gathered by the state shows that Iowa saw a significant increase in syphilis cases during 2012, said George Walton, the department’s sexually transmitted disease program manager. The disease can cause sores, rashes and fever, according to the Centers for Disease Control and Prevention. Nationally, it’s not a common concern on college campuses, but Audlehelm said it’s becoming more of an issue. At a conference Audlehelm recently went to in Chicago, she was told the disease is being seen more among college students. “I went to a section on sexually transmitted diseases because if you read this information, the highest age group is 15 to 24,” Audlehelm said. “They did talk about at that conference how syphilis kind of used to not show up much, but they did mention it was showing up more. For college students, HPV is the highest, and chlamydia and gonorrhoea are still the high ones.”At colleges in Iowa, however, Walton said other STDs, including chlamydia and gonorrhoea are more problematic.“For colleges, we don’t usually focus on syphilis,” Walton said. “Chlamydia and gonorrhoea are the most reported [sexually transmitted diseases] across the United States.” In 2012, Iowa saw a total of 53 early syphilis cases spread out among people between the ages of 20 to 55. The early cases only count people who were infected with the disease in the 12 months prior to their diagnosis.Between the ages of 20 and 24, 16 cases of syphilis were reported. Among 30 to 34 year olds, there were 15 cases. There were 22 cases reported for 45 to 54 year olds.Walton said over the past 15 years, both chlamydia and gonorrhoea have been on the rise throughout the United States and not just in Iowa. However, this does not necessarily mean there are more cases. Walton believes it might be due to increased detection of these infections.“There is a debate as to whether it is more infections or better jobs of screening,” Walton said.According to the CDC, there were 1,412,791 cases of chlamydia, 13,970 cases of syphilis and 321,849 cases of gonorrhoea across the United States in 2011.In 2011, Warren County had 1 case of syphilis, 79 chlamydia cases and 15 gonorrhoea cases, according to Iowa Department of Public Health statistics.To better understand the situation of sexually transmitted diseases among Simpson College students, an unscientific three question survey was conducted by The Simpsonian via email.Out of the 100 students it reached, 98.99 percent said they have not had a STD, five percent reported tp know someone who has had syphilis before and 74 percent believe Simpson College does not do a good job of educating its students on sexually transmitted diseases.Audlehelm says students often come in to ask her for resources regarding STDs and testing. However, Audlehelm does not find out whether or not students end up with STDs.There is no data kept or collected on how many Simpson students have STDs, she said. “I don’t know the outcome of their testing,” Audlehelm said. “Mostly what I’m doing is giving them resources and helping them with prevention activities.”If a student needs contraceptive protection, he or she can always visit health services, Audlehelm said. Condoms are available for students through community advisors and at health services.Audlehelm says she wants Simpson’s students to be thoroughly educated about sexually transmitted diseases and sexual behaviour. For instance, STD symptoms can be different among males and females, she said.For common diseases such as chlamydia and gonorrhoea, it’s not uncommon for females to be infected but show no symptoms, she said. This makes testing especially important. “It may not be deadly like HIV and AIDS, but it can certainly cause some huge issues in the future,” Audlehelm said. “Males typically will have symptoms, so they know something’s wrong and will go to the doctor but not always. A big part for me is educating students, so they can prevent and know and make a wise decision.”Students can also access campus resources on the Internet. Health 101 is the online college health magazine that all full time students receive monthly through email.Both Walton and Audlehelm know the importance and aim to instill this mentality in college students.“There is an importance for getting annual screening and several different tests if you are sexually active,” Walton said.