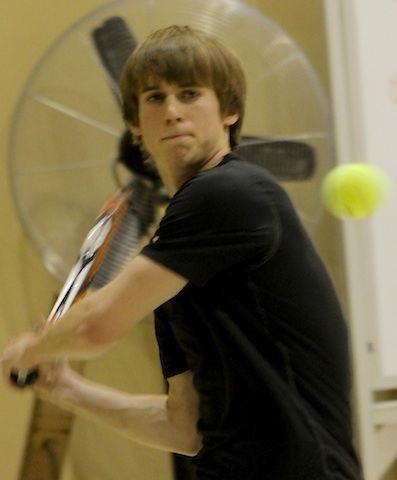 Tennis and the dreary, winter months don’t necessarily sound like they would go hand in hand, especially if you’re from Iowa, but the Simpson College men’s tennis team seem to make it work.Practices began in January, according to head men’s tennis coach TJ Cox.

“Practices have been good as they can be, so far, with Simpson’s indoor facilities being what they are,” Cox said. “They’re not exactly ideal for tennis, but we make due.”

The second year head coach said that the team has been working on consistency and footwork, two of the biggest and most important factors of the sport. Regardless of where the team practices and what they work on, the Storm have been chopping at the bit day by day to get outdoors and play on a real playing surface.“We were able to practice in Des Moines a bit this week in preparation for this weekend’s meet,” Cox said.

The Storm will travel to Galesburg, Ill. where they will go racket to racket with Knox College and North Central College. So far, the team is 1 3 on the year. The squad opened the season with a victory over Grand View College in Des Moines by a score of 7 2. The Storm, however, suffered three straight loses in its meet last weekend in St. Paul, Minn., losing 8 1 to Hamline University, 9 0 to The College of St. Scholastica and 8 1 to Macalester College.

“I was really pleased with our performance last weekend,” Cox said. “All our players fought hard, showed good sportsmanship, which is pretty much all I can ask for as a head coach. We ran into some pretty tough competition in the teams we played, but we were in a lot of the matches.

”Out of everyone on the 12 man roster, Cox appointed Simpson junior Alex Hook as team captain.“He played No. 2 all year last year, and it looks like he’s going to play No. 1 for us this year,” Cox said. “He’s a good kid, good leader, he’s been around the block a time or two and he knows what to expect in our conference. He’s been a good mentor to a lot of the new freshmen coming in.

”Of those newcomers for the Storm, there are five freshmen on the roster this season. Two of those freshman, however, are playing in the top three spots for the Storm: Zack Kusick at No. 2 and Peter Reitgraff at No. 3“Both of them have really impressed me a lot this year,” Cox said. “I’m pretty excited to see them develop.

The Storm will play in both Jackson, Tenn. and Memphis, Tenn., then they will drive about 160 miles east and will compete in Conway, Ark.All in all, Cox wants to see the team improve from how they performed last year.

“I think we’re going to be a lot better than what we were last year,” Cox said. “We’ll be able to field a full team this year, which we weren’t able to do last year. We’ve got a good group of guys I’m excited about, and I think we should finish higher in the conference than we did last year.

”The Storm men’s tennis team will be on the road competing until Apr. 6 when they return back home to Indianola. The squad will open up conference play against the University of Dubuque and Loras College at the Buxton Tennis Complex.