Simpson’s finest competed for the title of Mr. Simpson 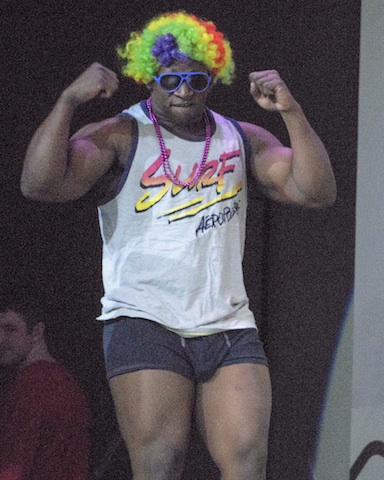 The competition consisted of three rounds. First a talent and casualwear round followed by beachwear round, and concluding with a formalwear and question and answer round.

Although this was first ever Mr. Simpson event, Enactus members hope it will continue in the future.

“I hope it turns in to an annual event. We have 119 people that have said they will be attending on Facebook, so if it continues to be a big hit, we hope to continue it every year,” Keegan Carson, sophomore and Enactus member, said.

The proceeds from the votes were all donated to the organization Mary’s Meals and the Campbell’s Canned Hunger Project.

Students were able to vote for their favorite contestant before the event started and between each round.

The night began with the men doing a dance number to the popular song “Can’t Touch This”. The men were then introduced individually on stage and given the chance to influence the audience.

Meanwhile, the first round of votes was being tallied. Only 10 men would move on to the second round. Once the top 10 was announced, the beachwear round began.

The men came on stage one at a time and each was sporting a different look. Some wore Hawaiian shirts and swim trunks while others simply wore shorts and speedos.

The votes were tallied again after this round, which left only five contestants. Junior Nathan Liston, senior Tyler Smith, sophomore Matthew Rottman, junior Dillan Hamilton and senior Clay Finely were all given the final chance to compete for the title of Mr. Simpson.

The final five came on stage dressed to impress in the final round of formalwear and a question and answer session. Each contestant was asked a series of questions in hopes that their answers would persuade audience members to vote for them.

In the end, Hamilton was the final man standing and was officially crowned Mr. Simpson.

“It’s nice to know that so many people supported me with can donations” Hamilton said.

Hamilton also said he was excited about all of donations people made on behalf of the cause.

“I was most looking forward to strutting my stuff during the beachwear round,” Ted Heying, senior and Mr. Simpson contestant, said.

Junior contestant Lance Kramer was excited to see so many Simpson students come out to support the cause.

“I was extremely surprised by the turn out. They had to pull out extra chairs for the people coming in, it was great,” Kramer said.

By the end of the event, Enactus raised over $467.49 and 330 non-perishable canned good items.