Students strut their stuff in the annual fashion show 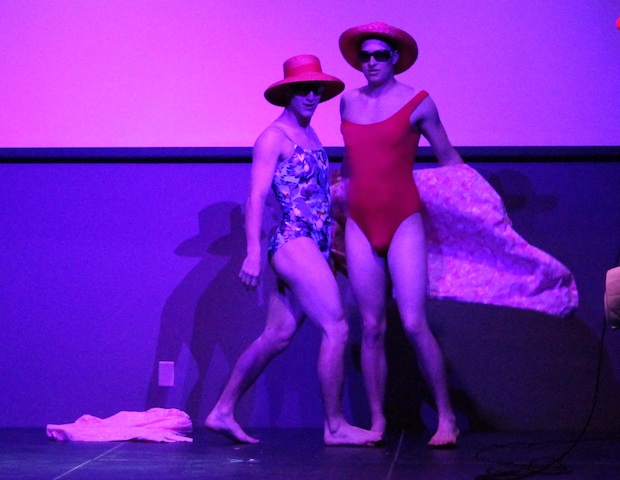 Simpson students continue to show off their good looks just a week after the Mr. Simpson contest.

In order to get into the event, a student was to donate at least one piece of clothing. Unfortunately, some students were permitted in without a donation. In all, there were over 300 articles of clothing that were dropped off at the front door to be donated to the Indianola Goodwill.

The event started off with 37 students making their way down the runway and modeling their clothes from Goodwill in hopes of earning votes from the three judges, Communications Professor and also PRSSA Advisor Jane Murphy, senior and President of the student body Joanna Freeland, and Goodwill Manager Heather Sinclair.

Three finalists, Ted Heying, duo Tyler Craig and Josh Pirtle and Keegan Carson were voted into the finals by the three judges.

Heying boasted a pair of boxer shorts, in which he revealed a Simpson speedo underneath while doing a somersault. Duo Tyler Craig and Josh Pirtle both cross-dressed into one-piece women’s swimming suits. To top off the finalists was Keegan Carson who boasted a short-sleeved plaid jump suit with a hat and sunglasses.

Carson was crowned, by the students’ applause, the champion of the 2013 fashion show.

The event was hosted by students Jeremy Reinert and Mark Lahart who decked out in patriotic gear. DJ’ing was Junior Rodriquez also known as DJ Franchize.

A Facebook event was created on Simpson PRSSA’s page in hopes of getting a confirmed number of attendants. PRSSA President, Natalie McCormick and Treasurer Alyssa Frank, both said that the page only attracted 75 confirmations. After the event was over, it was estimated that over 200 students showed up to see what the models had to show off.

“We were very happy with the turnout of the event,” both McCormick and Frank said. “We originally planned to have at least 100 students come and watch, and with over 200 attending, it was a success.”